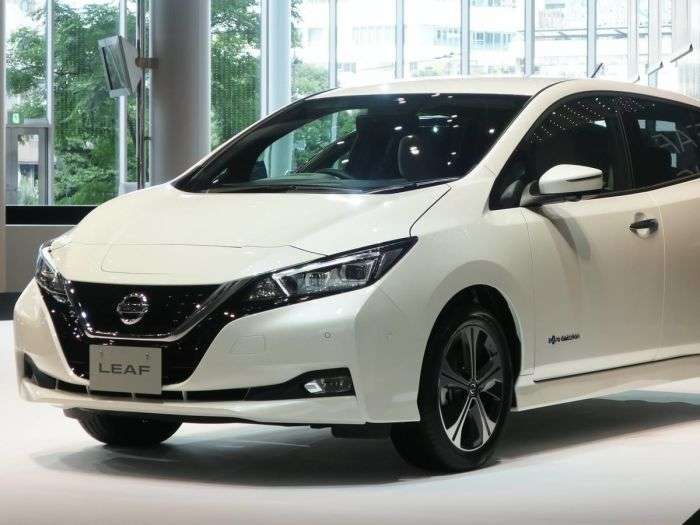 The Nissan Leaf occupies an interesting place in the EV market. While there are a few electric vehicles which are cheaper, the Leaf is still the most popular in the (barely) less than $30,000 market. With a couple of changes, the car inches toward becoming a realistic purchase for one-car families and individuals.
Advertisement

The new 2018 Nissan Leaf has increased its range.

The first change is that the Leaf has had a noticeable increase in range. The previous range was 107 miles, which could do most daily commutes, but would be on the edge if additional driving was need. This was compounded by the fact that a full charge on a standard 110v outlet took 35 hours.

Now the range of the 2018 Nissan Leaf is 150 miles, which gives drivers a bit more security while they are driving around. This also brings the Nissan Leaf closer to its competition, such as the Chevy Bolt, whose main advantage over the Leaf has been its 238 mile range. While the Leaf still does not achieve the same range, it is closing the gap, a process which may continue as the model progresses. In the meantime, you'll want to see how a Nissan Leaf's range changes as it gets older.

What makes the Leaf appealing is that it sits as the most affordable option in an expensive market. While EVs overall have dropped in price, they are still beyond the practical limits of price for most consumers. The Leaf is inching ever closer to those limits, and in this case, it has taken a $1700 step closer to being affordable.

The price of the 2018 Nissan Leaf has not been reduced by an overwhelming amount, but the reduction indicates a number of things. Nissan reducing the price may mean that the car is profitable for Nissan, which is a real testament to the lasting presence of electric vehicles. The decrease in price also supports the more general trend of decreasing the price of EVs to make them a real and viable option for consumers. For more on consumer reviews, check out this very thorough comparison with the Chevy Bolt.

The most obvious improvement for the Leaf is that the car has grown out of its garish EV styling. It now looks like a regular car. It even has a normal grill, which other EVs have chosen to do away with. This makes good sense. The novelty of electric cars has certainly not worn off completely, but the idea of using as car's styling to broadcast to the world that "my car is different than yours" has gone from being interesting to pretentious and vulgar, especially for a model which is meant to be an electric economy car.

The Nissan Leaf is becoming a "Regular Car"

What all of these changes contribute to is a slow-but-certain approach toward the kind of normalcy which will make electric cars usable for the vast majority. The steps are slow, but worth documenting, as each passing year brings the likelihood of having an electric car that much closer to being real, although the issues of range and cold weather remain problematic, as seen in this article.

Alan Osborne wrote on June 20, 2018 - 12:53pm Permalink
"The previous range was 107 miles, which could do most daily commutes, but would be on the edge if additional driving was need. This was compounded by the fact that a full charge on a standard 110v outlet took 35 hours." The charging rate at 120V is limited to 12A, so that's a 120V x 12A = 1.44 kW rate. In reality, it's slightly lower due to losses. The useable capacity of a 2017 is about 28 kWh, so 28 kWh/1.44 kW = 19.4 hours for a full charge from dead flat. Most of the time, owners would charge from 20% to around 80% though, so more like 12 hours overnight charging. Having said that, I would guess that 90% of owners have an L2 home charger installed.
David Radzieta wrote on June 27, 2018 - 12:49pm Permalink
Best Datsun/Nissan we have owned. We have two 2012Sls and one 2016SL for longer trips out of town. We only charge at home when we drive around Birmingham, maybe some opportunity charging here and there to show off. Typical try to keep them in the 20-80% charge range to maximize battery longevity to 150K+ miles. When we go out of town we plan on activities to do while charging -- hiking, dining, biking, walking, shopping. We find chargers using PlugShare dot com. Most reliable Datsun/Nissan ever made. The best thing however is that we save up to $600 every month on gasoline as a family of three. We liked the first Leaf so much we bought two used ones since then. If you go out of town a lot though you might consider a plug in hybrid like the Volt or Prius Prime. They will cost you a lot more in maintenance but they do have excellent long range capabilities. My 2012 LEAF literally has saved my Titan Crew cab 4x4 that we use for towing and I used to use for commuting.