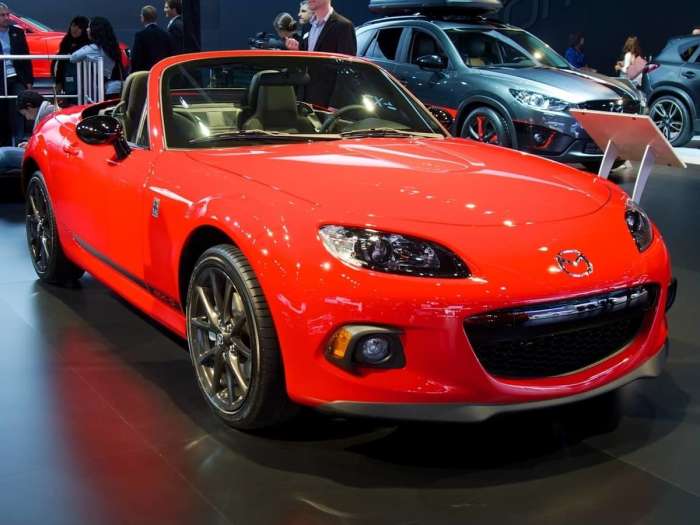 The NC is the Forgotten Miata, but They're Worth Looking Into

Out of all of the iterations of the Mazda Miata, the NC generation, which was made from 2006-2015, is often the one which is left on the bench. There are some good reasons for choosing one of the more desired generations, but also good reasons to go with the underdog.
Advertisement

When the 2006 MX-5 Miata dropped, it met with mixed headlines. Some drivers thought it was a grown up version of the original, others saw the heavier, softer car as a compromise of the original Miata's dedication to lightness and minimalism. Now, of course, the ND has further tarnished the NC's reputation, making it all but obsolete. But there are a few reasons why buying an NC may be more timely than ever.

The NC Miata, while it doesn't outrun the newest model, does benefit from a 2.0L engine with a 170bhp output, more than any model before, apart from the legendary MazdaSpeed. As a result, the NC takes the least time to get to 60mph, at 7.5 seconds.

The NC Miata may be the heaviest of the cars, but the weight is an issue on paper more than in practice. Most of the drivers who criticized its weight admitted that the car still had brisk, chuckable handling. This makes sense. Being heavier than an NA or NB does not exactly make a car overweight by default, and the NC still weighs in under 2500lbs.

What really separates the NC from the preceding generations is refinement. The NC Miata is a more friendly car to drive every day. The not-uncommon retractable hardtop cuts down on noise in a car which is already noticeably less noisy than the NA or NB. The ride is smoother, the seats are more comfortable, the amenities are more plentiful.

Sure, this is not what the Miata was designed to be, and it does seem to be a compromise. But for a compromise, its a damn good car. Especially if its a driver's only car. I made a couple of 12-hour long trips in my '99 NB, and the harsh ride and lack of room for a 6'2" driver made them pretty exhausting. The NC would have made them much more relaxing.

Now at this point, you might be saying "Sure, the NC could be a good option compared to the NA or NB, but what about the ND--one of the most critically acclaimed cars of the decade?" The ND is a better car. I'll say that now. But part of what that means is that the values of NCs when down precipitously after the ND came out.

If you were shopping for Miatas before 2016, the gap between an NB and an NC was pretty sizeable, largely due to the "latest model" effect. Now, NCs have dropped in price by a huge amount. I was amazed to find a 2015 (albeit with an insurance rebuilt title) MX-5 Miata Grand Touring with low miles for just $12k. Early NCs have dropped well into the four digit range for a good one. I argue that this makes them the best value among the Miatas available.

It's a fair argument to make that the market has made the NC a better buy than it has ever been. It may be time for Mazda enthusiasts to open up their minds and start test driving some 2010s or 2006s. Craigslist is not short on NC options, so take a look what is in your area.

Michael Price wrote on July 4, 2018 - 7:55pm Permalink
I must say I'm quite happy with my 2014 Club edition PRHT (NC)
John Goreham wrote on July 12, 2018 - 12:36pm Permalink
Still kicking myself for letting my low miles NC Miata go.
Marcello Torricelli wrote on March 6, 2020 - 9:35am Permalink
I own an 95 NA. Love the way it drives and is by no means pristine because I believe in driving a car. That said, I help my girlfriend pick out a well priced 2007 NC Miata. The price was the initial draw and I must admit I was somewhat ambivalent about the NC. Now that she owns it and I've driven it numerous times, it is hands-down a better car. In fact if she were open to it, I trade mine for hers in a heartbeat. And just so you know I've owned my Miata na for 20 years
John Goreham wrote on March 6, 2020 - 9:46am Permalink
My single complaint about my 2007 was the door cupholder that rubbed my left knee raw. Mazda fixed it in 2009.
David Henderson wrote on September 15, 2020 - 6:38pm Permalink
We've had my wife's 2013 PHRT (NC) for over 6 years now - she loves it! If I tried to sell it she'd probably divorce me, lol. She's looked at the new ND; nice car, but she likes the NC better. It is roomier, and [she feels] better laid out. As for the handling - the thing still handles like a go-cart: it goes where you point it and tells you when it's about t break loose, yet still manages to be comfortable as her (and sometime my) daily. We love it. Mazda got this one right in our opinion.
Steve wrote on February 23, 2021 - 6:32pm Permalink
I'm totally satisfied with my '06 NC. Rides significantly better than my '90 NA. I put a set of Michelin Pilot Super Sports on it and it made it handle even better.
Bill T wrote on March 7, 2021 - 4:24pm Permalink
Just bought a 2006 ....other than the knee cup ...love this car. It is the funnest car I have ever driven.
Rory Houlihan wrote on April 13, 2021 - 4:40pm Permalink
Bought a 2007 PRHT Sport Edition in Red w/black leather with 81,000 miles on the clock in excellent condition for $9800.00. I love it better then my 93 RX7 R1 which I drove to 193,000 before the Rotary motor went south. This car is definitely a keeper!
Scott K Smith wrote on September 6, 2021 - 10:52pm Permalink
Picked up a 2009 NC Sport soft top, one owner, 26K miles and could not be happier...peppy, handles great, comfy seats....leather would not work in the sticky MD summers, so love the cloth seats. This car is pure joy to drive and picked it up for $12K.....best $12K I could ever imagine spending...again, one owner, garage kept, not at scratch or ding, and the NC is by far the coolest looking version. Test drove NB's and ND's. NB's had no pep, and small cabin, and although the ND had a bit more get up and go than my NC, the cabin is just not as roomy and comfortable as the NC. So, to all of you NC haters.....have you actually driven an NC....