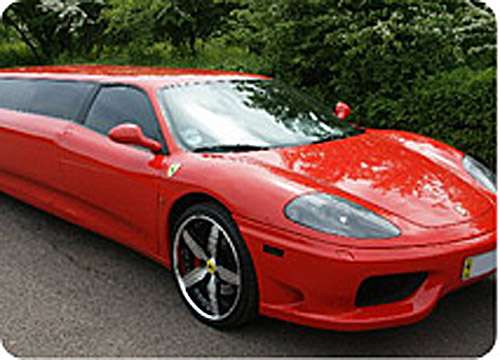 When you arrive in a Ferrari Stretch Limo, you know you have really arrived

The FreeDictionary.com defines “putting on the dog,” as making things extra special or dressing formally for a special event. So the shoppers who arrived in the Ferrari stretch Limousine at Harrod’s Department Store in the Knightbridge area of London yesterday, could only be described as “putting on the diamond dog.”
Advertisement

The startling, stunning and, chances are, most expensive eight-passenger vehicle in the world is the design of Manchester-based businessman Dan Cawley, owner of Style Limousines. He sold the Ferrari Limo to Limo Broker of London where it is in constant demand throughout the island nation for school proms, weddings, doe and stag parties, corporate events and of course, extravagant shopping trips.

“Every boy wants to get into a Ferrari, this was a way for people to be able to do that with seven mates,” Cawley told Paul Bentley of London’s Daily Mail. “It's the biggest and craziest vehicle you can get. We made it because we wanted to create the ultimate Ferrari experience. There's room for eight people – so you can get plenty of shopping bags in there.” With no bay in the area suitable for a vehicle of such length, the car simply stopped on double yellow lines at the front of the store.

The limousine is one of a kind and was built in the UK by splitting a Ferrari 360 Modena in two, extending the chassis, matching the body, adding seats in the middle and gull wing doors.

In fact the limo is something of a celebrity itself, having been featured in a number of TV programs including the popular BBC automotive show, Top Gear.
It is said to be the fastest limousine in the world, with a top speeds of 166 mph but we can’t help wondering how and where they tested it. It’s production costs are estimated to be as much as $392,000.

With its apparent length of over 20 feet, few shops have passenger drop off spaces to match, so the driver was forced to stop on the roadway centerline to allow his clients to exit, as people nearby dropped their jaws, executing double takes.

Next time Torque News is in London, we’ll make a point of getting a closer look. The company has Bentley, stretched Lincoln Towncar and a number of interesting vehicles for hire.

Aren’t you glad you don’t have to try and parallel park this Ferrari. Paste this link (http://bcove.me/v5yfa0jj) into your browser, to see someone trying to do just that – park this exotic land yacht in less than an acre.