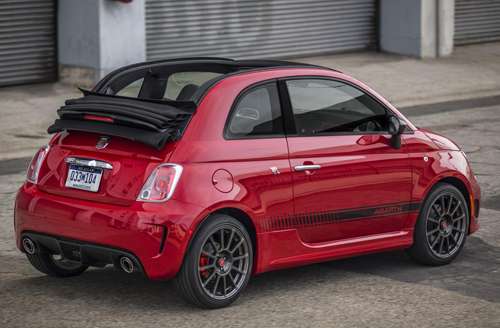 What's up with SAMA and the Fiat 500 Cabriolet

The Southern Automotive Media Association (SAMA) has just named the Fiat 500 Abarth Cabriolet the Best Small Convertible for the third year running, and though we genuinely respect our colleagues in the south, what are they thinking?
Advertisement

The Fiat 500 Abarth Cabriolet is a marvelous feat of engineering – stylish, economical, quick and functional for many. Technically, the Fiat Cabriolets rollback top qualifies it, but in the truest sense, doesn’t a true convertible top fold back without leaving the window frames in place?

Remember the cigarette packs that came in a flip-top box? The Fiat 500 Cabriolet is, to some extent, the automotive analogy of a “crush-proof” box to the cigarette soft pack.

Have they driven any other small convertibles?

Naturally, the Chrysler Auto Group press release doesn’t even mention the competition. A quick search with the group’s name revealed only a lot of pictures of Fiats and a couple of very attractive models on their Facebook page.

Has the Mini Cooper Cabriolet, with its similarly spirited ride been considered since being released last year? Does the Fiat 500 outdo the Mini-Cooper S convertible in some manner we're overlooking?

How about the John Cooper Works model of the Mini Cooper S convertible?

Has SAMA even looked at the VW EOS? We can understand excluding the Tesla Sport Roadster due to its price, but we still can’t get over the Fiat 500 Cabriolet winning three times in a row.

Of course, the event did pick the Chrysler 200 as the Best Full Size Convertible, and though we are not sure the writers at Torque News would agree, we won’t take issue with that.

“We are glad that Chrysler and FIAT brands joined us for a third year at our Topless in Miami event,” said Jaime Florez, President of SAMA. “The event continues to grow with more cars entering every year.

“The distinctive tone and performance of the Fiat 500 Abarth Cabrio captured the judges’ attention and let everyone know that the Italians have arrived. The elegance and craftsmanship of the Chrysler 200 Convertible, plus room for four adults is what tipped the scale in the full-size sedan category.”

We just think when SAMA looks at convertibles next year maybe they should avoid overlooking the Lexus IS-C and Infiniti G 37 convertibles among a few other models. For that matter, what’s wrong with a Ford Mustang convertible?

Topless in Miami sounds good, but is it the cars we are talking about or is this another case of driver distraction?

A tip of the Torque News Hat to the auto journalists of SAMA – whether we agree on convertibles or not, we can certainly agree that open air driving is a joy unto itself.