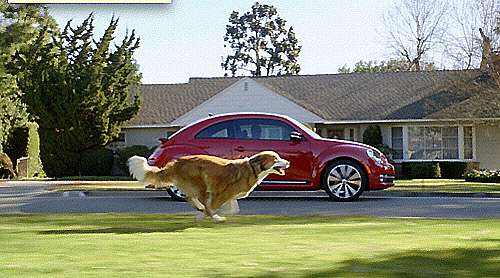 If you remember Volkswagen’s Super Bowl commercial from last year wherein a six-year-old dons a Darth Vader mask, plunging the viewer into the young boy’s overactive imagination, the continuation of the theme in this Sunday’s spot should strike a chord within the Force.
Advertisement

Volkswagen believes its iconic Beetle is the very soul of the brand in the U.S. – the Volkswagen that initiated the American love affair with the German brand way back in the distant Sixties. Coupling that group with the millions of fans of George Lucas’ dual Star Wars trilogies provides an extensive audience base willing to view and even celebrate the manufacturers message.

With sales reportedly up 40 percent over 2010 by December of last year the company is doing something very right. Part of that is focusing on value and increased efficiency in vehicles like the Jetta, Passat and TDI. Still there’s something about the classic shape of the VW – once disparagingly called a “pregnant roller skate” – that has left a lingering affection in the hearts and minds of the world.

"This is a perfect opportunity for Volkswagen to celebrate with the fans that have made 2011 such a record-setting year for the company," said Tim Mahoney, Chief Product and Marketing Officer, Volkswagen of America, Inc. "This year's commercial will build on Volkswagen's ability to tell human stories simply while continuing to build on the brand's momentum in the year ahead."

Volkswagen's 2012 Super Bowl commercial is titled The Dog Strikes Back and tells the story of an adorable dog named Bolt, half St. Bernard and half Australian Shepherd, who has been overeating due to his tendency to clean up all the food the family toddler throws on the floor. He is inspired by the 2012 Volkswagen Beetle to say no to the extra calories, work out and get into shape so he can run with the car.

The surprise twist at the end of spot alludes to the Star Wars theme of Volkswagen's 2011 commercial called The Force, which became a pop culture phenomenon with almost 50 million hits on YouTube to date.

Volkswagen kicked off the 2012 Super Bowl campaign with a video distributed last month titled The Bark Side, revealing a group of dogs barking out the Star Wars' Imperial March. At the end a greyhound costumed to resemble an Imperial Walker travels across the screen. The teaser was an instant Internet sensation, gaining over ten million views.

Following the success of last year's spot, Volkswagen and Deutsch LA have teamed up with Lucasfilm again to return to the Stars Wars Cantina, peopled with wild and fantastic aliens, for the final 15 seconds until a special appearance by the one and only Darth Vader.

"We believe this spot underscores the Volkswagen brand's unmatched advertising legacy. It manages to highlight the redesign and performance of the Beetle with the lighthearted touches that viewers expect from the VW brand," said Mike Sheldon, CEO, Deutsch LA, Volkswagen's creative Agency of Record.

During January, Volkswagen launched a Big Game tab on Facebook serving as a shop for all things game related, including The Bark Side teaser, online release of the ad and an Intergalactic Invite function that allows users to send Star Wars party e-vites to friends for the Super Bowl and more.

Hey, pass the guacamole, will ya?

LG's New EV Battery Plant Is a Welcome News for Tesla
Tesla Giga Berlin's New Hurdle: It's Not Only the Gov't, but Now Tesla Itself
END_OF_DOCUMENT_TOKEN_TO_BE_REPLACED