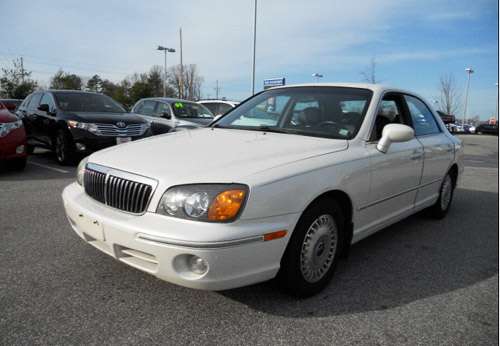 Used cars selling in Maryland for as little as $5

You’ve heard the soaring sales reports of the major manufacturers – new cars are selling at near their record-setting 2007 levels. A Toyota and Hyundai dealer in Lexington Park MD is holding a one day sale to clear the overabundance of used trade-ins from the lot, marking down prices until some may sell for as little as $5.
Advertisement

So you ‘re probably thinking the only thing they’re selling for $5 is a 1987 Yugo needing a new engine, right? That’s not the fact, Jack, as looking over their online inventory the oldest car we could find was a 2001 Hyundai XG300 and it was the oldest on the lot by five model years.

“In the last three months our sales have increased at a tremendous rate”, Mckay told a reporter for BayNet.com. “Now, we must reduce the number of cars and trucks on our lot to a more manageable number. During this Five Dollar Sale every used car and truck will be slashed hundreds and even thousands below its original price. In fact, cars that normally sell for eight thousand dollars will be sold for three to five thousand. Our customers will find these prices even lower than at the wholesale auctions.”

That’s because bargain hunters at auctions tend to drive prices up. In this case their whole inventory of used cars is on sale with descending prices as the day continues. So here’s a chance to get that used car for your teenager or a day-to-day commuter at an unusually low price point.

Why would a dealer do something like this? Because, if for no other reason there’s a cost per diem to keeping a car on the lot. The longer they sit, the more their potential profit evaporates. Besides, to sell more new cars, they need room for the trade-ins that will move quicker.

So at Toyota of South Maryland they all go on sale at 8:30 a.m. for pre-registration, and all vehicles will be opened for inspection at 9 a.m. for one hour before the sale starts at 10 a.m. Prices will be posted and participants will have the opportunity to purchase when the price matches their budget. Prices will be slashed as much as $500, every 30 minutes, until they are purchased.

If you don’t live near Maryland, take heart, nevertheless. The number of sales dealerships have been making recently insure the price of used cars will go down in direct contrast to what they were going for when new cars weren’t moving very well.

Who knows, a Five Dollar Sale could be coming to a showroom near you in the near future.

Tsingshan's Threat to Tesla: EV Maker Is In Battery Crosshairs
Tesla-Funded Research Reveals One of The Biggest Mysteries of EV Battery
END_OF_DOCUMENT_TOKEN_TO_BE_REPLACED