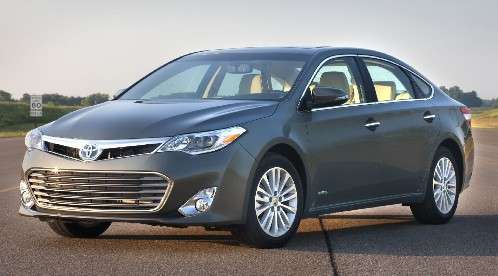 Toyota, after 26 years of manufacturing, $24 billion in direct investment in North American facilities and having created 365,000 high paying US jobs, celebrated the 25 millionth vehicle built within the continent today at a ceremony at its Georgetown, KY plant as production of the all-new 2013 Avalon revs up.
Advertisement

“Toyota’s 25 millionth vehicle signifies the tireless work of thousands of Toyota team members, hundreds of North American supplier partners, and great dealers giving their best every day,” said Steve St. Angelo, executive vice president of Toyota Motor Engineering & Manufacturing North America, Inc. “We continue to evolve as a company thanks to their commitment to build the best vehicles in the market.”

“This is a pivotal time in Toyota’s history,” James said to a smiling group of Toyota workers. “What better way to cap off 26 years of manufacturing excellence than with the all-new Kentucky-built Avalon, a shining example of what our customers have to look forward to in the future.”

"We thank the millions of customers, some of the finest team members in the world, hundreds of excellent North American suppliers and our outstanding dealers who have supported us in reaching this milestone,” added Bill Fay, Group Vice President and General Manager, Toyota Division, Toyota Motor Sales, USA, Inc.

The Kentucky plant, designated Toyota Motor Manufacturing KY or TMMK has produced a total of 9,247,000 units of the Camry, Avalon, Sienna, Venza, Solara and Camry Hybrid.

The TMMI plant in Indiana has assembled 3,243,000 Siennas, Tundras, Highlanders and Sequoias.

TMMMS in Mississippi has contributed 111,000 Corollas to the total, while TMMBC in Baja CA has produced 336.000 Tacomas.

The Texas based TMMTX plant manufactured 806,000 Tundras and Tacomas in the heart of pickup country.

An additional 465,000 Camrys built by Subaru Indiana Automotive comes to the grand total of 25 million North American vehicles attributable to the brand.