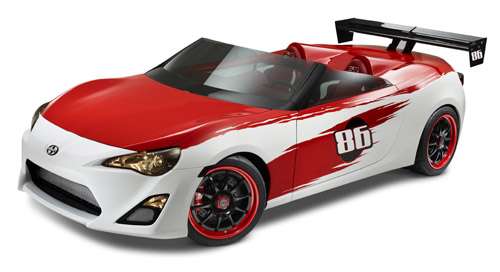 The racecar was designed and built by Joe Iacono of Iacono Design and Jeremy Lookofsky of Cartel Customs. The FR-S Speedster will not only be featured at the race but also prominently on a limited edition poster commemorating the day’s event.

If you’re there, look for the car at the Lifestyle Expo lobby on Friday or Saturday, and then Sunday it will serve as the official Grand Marshal vehicle on Sunday, escorting Parnelli Jones as the IZOD IndyCar Series race Grand Marshal. 2012 Long Beach Motorsports Walk of Fame inductee Scott Pruett will be at the wheel. The Scion FR-S Speedster will be at select appearances after the race.

“The Scion FR-S Speedster is a true sports car that embodies the spirit of the Toyota Grand Prix of Long Beach and our commitment to motorsports,” said Toyota National Motorsports Manager Les Unger. “We think enthusiasts are really going to enjoy seeing this vehicle during the race weekend festivities.”

The custom showpiece resulted from a sweet deal between Toyota and its youth-oriented Scion brand. The FR-S Speedster takes its DNA from the 2013 Scion FR-S, a rear-wheel-drive sports car that is Toyota’s ultimate exercise in balancing performance and handling, compelling style and flexible utility with startling fuel economy.

The FR-S itself gets most of its inspiration from the nearly legendary AE86 Corolla, better known as the “Hachi-Roku,” Japanese for “eight-six.” A virtual Haiku in metal, the car was an attempt to achieve pure balance via compact size, oblique shape and the strategic implementation of the world’s only flat boxer engine in a front-engine, rear-wheel-drive configuration.

Toyota will also host a live art event on Saturday, April 14 at 1:00 p.m. in the Lifestyle Expo lobby. Urban artist Justin Bua will recreate the scene on site featured in his commemorative poster for the race. Grand Prix fans are invited to take part in the live recreation.

Though not participating in the Gran Prix, the FR-S Speedster will be on hand to represent Toyota Racing at the event.

Here are specs for the Scion FR-S Speedster straight from Toyota’s press release:

Nicolas Zart wrote on April 14, 2012 - 10:32am Permalink
Hi Don, I'm at the Long Beach GP and the Scion is very, very nice up close. I feel should they turn it into a real production car, it would have immediate success, at least in a convertible way. Nicolas