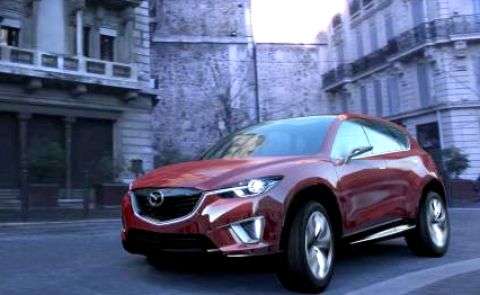 This new car is a showcase for the new technology and design direction to be taken in the next generation of Mazdas. The Minagi concept car has an unabashedly aggressive stance, looking as much like an aquatic predator as a landlocked conveyance.
Advertisement

The outside is what Mazda refers to as the Kodo design language while beneath the skin, the Minagi is teaming with the new technology the brand calls SkyActiv.

Kodo design refers to a look that possesses the “soul of motion.” A sort of amphibian disposition that implies it might jump right at you if you get too close.

Designed from the ground up, Minagi is the second concept from Mazda based on Kodo thematics. It follows the Shinari concept revealed last year, but this time in a compact all-wheel-drive crossover.

“I wanted to convey something different from the Mazda Shinari," said Masashi Nakayama, chief designer of the Minagi Concept. "I felt a compact crossover was the perfect vehicle to express agility and focused movement; the flexibility of four limbs moving in unison and an upright posture.”

The name, in Japanese, brings to mind “an object pulsing with energy,” according to the brand’s press materials. The designers reportedly attempted to recreate the look of a cheetah – just before it pounces on its prey.

Mazda believes this is a unique crossover for urban adventurers that conveys a lively ability to quickly leap into action in any direction, all the while generating driving pleasure and the environmental and safety performance of SkyActiv technologies.

In short, Mazda goes on and on about the superlative design of every side of the vehicle as well as the interior, which they refer to as a cockpit.

“Four upright satin chrome struts appear to support the instrument panel, each rising upward in an image of vertical strength, appearing to defy gravity, underscoring the impression that Minagi’s occupants are securely protected.”

Okay Mazda, enough with the metaphysical conceit – hand it over. We’re convinced – we want to drive one and see if it’s all you say it is.