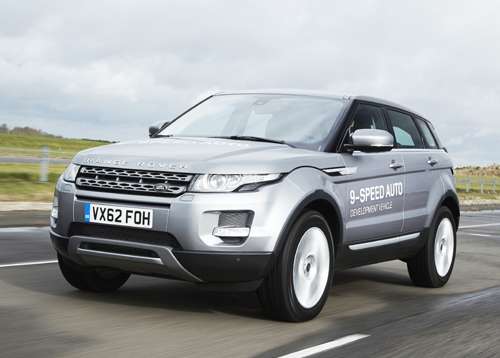 The brand’s current line of vehicles all use a six-speed tranny, and boosting the number of gear ratios to nine will not only produce fewer emissions, but will also improve efficiency.

The robust nature of the 9HP transmission expands upon the all-terrain prowess expected of a Land Rover while still delivering high levels of refinement and efficiency. The bottom ratio level in the 9HP is far lower than the current six-speed, optimizing the brand’s vehicles for their established forté – off-road use, towing and especially the steep grades found on some highways

The previous incarnation of the Land Rover six-speed would downshift in sequence, but the new 9HP can skip gears to accommodate more rapid deceleration. Should the driver try to downshift when moving too fast for a gear, the transmission will make the shift as soon as engine speed drops to the proper level.

A Fast-Off mode, by measuring the rate of throttle release, learns to anticipate the driver’s automotive performance style, i.e. the demand for additional power, holding a gear as needed to provide the desired torque.

The torque converter uses a multi-stage damper system to smooth acceleration from a standstill while the ingenious adaptive shifting system anticipates the driver's moves within seconds, providing crisp response for brisk driving but easily relaxing into a more economical mode when the driver chills out a bit.

In additional, the Curve Mode detects and analyzes acceleration and deceleration forces, along with pedal position, to control upshift timing.

The masterfully engineered 9HP is only 0.24 inches longer and remarkably weighs 16.5 lbs less than the six-speed transmission, despite the addition of three more gears. This spectacular feat is accomplished via a new compact hydraulic vane-type pump, two patented dog clutches (that replace bulkier standard clutch packs) and a nested gear set.

The new nine-speed transmission will be produced at ZF's Gray Court facility in South Carolina.

Rich wrote on February 28, 2013 - 5:29am Permalink
Isn't this the same 9 Speed that Chrysler will be putting in everything that it makes really soon, in fact isn't the 9 Speed plant in Kokomo Indiana actually going to produce 9 Speeds for production before the South Carolina plant does? So aren't Chrysler vehicles actually going to be the first to have a 9 Speed not Land Rovers?