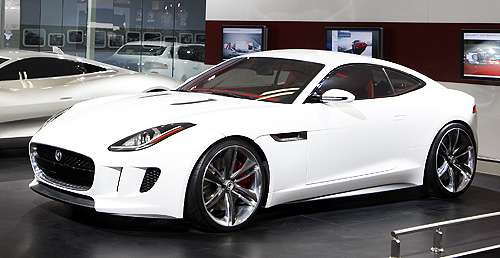 As the Canadian International Auto Show opened today in Toronto, Jaguar Land Rover Canada presented the Jaguar C-X16 to our parliamentary neighbors, along with a somewhat refreshed line of offerings from the fabled manufacturer.
Advertisement

First revealed at the Frankfurt Auto Show last year, the Jaguar C-X16 concept is a visionary embodiment of Jaguar's design and technological vector for the foreseeable future. The C-X16 takes the front-engine, rear-wheel-drive formula, for which the manufacturer is known, and redefines it for a new century in a performance-bred hybrid with perfectly balanced weight distribution and impeccable lineage.

Besides this glimpse of the shape of things to come, show visitors will also have the opportunity to get close up and personal with other remarkable models, such as the 2012 Jaguar XF, XK, XJ as well as the 2012 Range Rover, Sport, Evoque, and LR4 while the show runs through Feb. 26.

The 2012 Jaguar XF is a sedan possessing the soul of the jungle cat for which it is named, the most affordable Jaguar is a delightful collaboration between dynamic personality, striking appearance and an attractive price point. A minor facelift for 2012 brings the XF into the family DNA of the present day.

As someone with only a little experience on the track, driving a 2011 Jaguar XFR about the High Plains Raceway as my first track car at last year’s RMDE event was almost more than I was ready for – the XFR delivers performance that is in a word breathtaking.

The Jaguar XK was the first car created under the incisive eye of Jaguar design director Ian Callum. One of the truest physical embodiments of the sports car’s essence to date – at least to someone who has held the classic XKE close to their heart for decades. Driving the 2010 XKR is still a treasured memory, as the model is the highbred progeny of the legendary E-type and the scintillating realization of an automotive enthusiast’s rapturous dream.

For 2012 the Jaguar XK is endowed with numerous revisions reaffirming its contemporary character and thoroughbred pedigree. Among these are a choice of 16 exteriour paint colors, 10 alloy wheel designs in either 19 or 20-inches sizes.

A 'Black Pack' option replaces exterior chrome on the XKR with a gloss black finish, along with glossy 20-inch black alloy wheels and body colored aerodynamic enhancements. Can you say XKR Stealth?

The revolutionary 2012 Jaguar XJ is the epitome of the luxury executive sedan – a level of comfort, serenity and status seldom achieved in an automobile. Last summer I was privileged to drive a trio of manufacturer representatives from a hotel near Denver’s airport to a Park & Ride in Evergreen CO.

Having driven large Jaguar sedans in the past, Ian Callum has accomplished a revolutionary reinvention of the large premium luxury sedan in this vehicle. The sheer comfort, ease of driving and readily apparent reservoirs of sheer power awaiting my slightest command imbued a sublime feeling – with a wide grin across my face, a warm feeling flowed through me along with the overwhelming notion of being blessed.

There is no way of knowing if Jaguars make others feel like that – it comes from spending an entire day driving a 1971 XKE convertible while in college – it would color my perception of cars forever more.

There is little to be gained by discussing appointments. It you can think of a desirable creature comfort it probably has it. If it doesn’t, you can probably get it. Right up to mobile office space with fold-down desks and even massaging seats.

The 2012 Jaguar XJ also comes in a longer XJL variant with three trim levels of both ranging from $88,000 for the XJ to $135,500 for the XJL Supersport.
Range Rover, the go anywhere in style SUV used to protect the Queen, returns with minor tweaks to the line. Notably the Range Rover Autobiography returns in 2012 with exclusive exterior trim. Three trim models range from $94,330 for the HSE to $138,740 for the Autobiography.

The 2012 Range Rover Sport returns with a choice of two engines, upgraded infotainment systems, and a smaller smart key fob. The Sport model comes in four trim levels starting at $73650 for the Sport HSE and ascending to $100,650 for the Sports Autobiography.

The radical new design of the Range Rover Evoque comes to North America this year. The Evoque is a brand new breed of Range Rover, the lightest and most fuel-efficient model ever, but remains true to the mission and values of it predecessors. The Evoque comes in either three or five-door variations, priced at $52,595 and $46,995 respectively.

Land Rover’s LR2 and LR4 return with upgrades in audio, navigation, and infotainment features. The LR2 has refreshed design updates inside and out plus fetching new optional 19-inch alloy wheels.