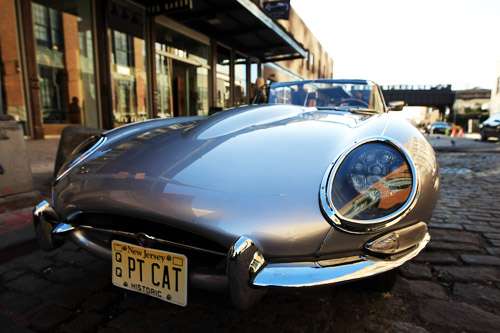 Jaguar will soon bring two new forced-induction engines to the global market: a supercharged 3.0-liter V6 plus a turbocharged 2.0-liter I-4 as optional choices on a number of future Jaguar models.
Advertisement

Based on the key technology in the Jaguar 5-liter V8, the supercharged 3-liter V6 will come tuned for either 340 or 380 horsepower. The 2-liter turbocharged I-4 engine will develop 240 horsepower from its inline configuration.

The more powerful 380 hp model of the 3-liter V6 will only be available in the forthcoming Jaguar F-TYPE roadster, though both engines are mated to eight-speed automatic transmissions. The V6 engines will also feature Jaguar's new Intelligent Stop-Start system.

The new Jaguar F-TYPE two seat roadster, the first car to feature the 380 hp supercharged V6, is expected in 2013. The Jaguar F-TYPE will deliver unparalleled performance while doing so with a bit more economy and environmental consideration.

"Jaguar currently has its strongest range of products for several decades,” said Adrian Hallmark, Global Brand Director for Jaguar Cars. “Our continued growth is dependent on two things; activating the awareness of the brand, and expanding our range to enable us to access new customers in both existing and emerging markets. The introduction of these two additional forced-induction engines is integral to this ambitious plan."

The engineering design of the new V6 was based on the technology of the proven 5-liter V8, a widely praised all aluminum alloy engine used for everything from luxury sedans to 186-mph exotic sports cars. The supercharged V6 takes advantage of various aspects of the V8 including direct injection and variable valve timing. Offering comparable levels of performance to the naturally aspirated version, the supercharged vehicle does so with greater efficiency and output for its size.

"Both these new engines make intelligent use of forced-induction technology to produce high-specific output in an efficient way, while delivering the compelling combination of flexibility, refinement and driver reward that are integral attributes in all Jaguar engines," said Ron Lee, Group Chief Powertrain Engineer for Jaguar Cars.

The new quad-cam V6 takes advantage of a lightweight aluminum alloy die-cast block reinforced with cross-bolted main bearing caps to increase rigidity. The positive and negative torques, generated by the movement of the intake and exhaust valves, provide the basic rhythm to the dual independent variable cam timing system. It allows actuation rates over 150 degrees per second across the rev range, optimizing power, torque and economy at all speeds.

Spray-guided direct injection of precisely controlled amounts of fuel are thrust into the exact center of the combustion chambers at pressures of up to 2,176 PSI, ensuring a highly responsive, uninterrupted power supply. Delivering fuel multiple times during the combustion cycle creates a balanced air-fuel mixture resulting in cleaner, more efficient combustion.

Nestled in the engine’s V rides the cutting edge roots-type twin vortex supercharger, the true source of the engines capabilities. A water-cooled intercooler keeps incoming air cool to optimize output. The latest Bosch engine management software controls the supercharger boost and a system of front and rear balancer weights engender the same smoothness and refinement for which the brand is well known.

The supercharged V6's powertrain is completed by a Jaguar-tuned ZF eight-speed automatic transmission. This transmission's large spread of ratios allows the engine's prodigious power to be fully exploited while optimizing economy and emissions.

The Intelligent Stop-Start system is able to restart the engine in less time than it takes to release the brake and engage the accelerator.

For those more concerned with economy than performance, the turbocharged I-4 provides greatly enhanced efficiency without compromising power. Also mated to the new ZF eight-speed automatic transmission, the extended range of gear ratios again maximizes both power and efficiency. This I-4 turbo engine delivers 240hp at 5,500 rpm, within a wide range of engine revolution speeds. Weighing only 304 lbs, the turbocharged I-4, is the lightest powerplant ever to propel a production Jaguar.

The low-inertia turbocharger makes possible the inline four’s considerable power and torque outputs. Fed via a lightweight thin-walled exhaust manifold, creating a shorter engine warm-up period, the turbo uses chain-driven cams and variable timing on both intake and exhaust to maximize output across a broad range of torque.

The same efforts to maintain the famous Jaguar standards of smooth, quiet operation and a thoroughly pleasant driving experience have been taken for the turbocharged I-4, of course.

So who was it that said a Jaguar never changes its spots? At Torque News, we eagerly await the opportunity to check the pedigree of the new supercharged V6 and turbocharged I-4 to see if they remain true to the Jaguar mystique.

Some will tell you everything in the physical plane exists in the spirit realm first. If the Jaguar has a soul in that sense, it probably would appear like the photo above of a 1961 E-Type roadster, which was on display April 4 in New York at STK for Jaguar's Celebration of its sporting past and future, following the announcement of the F-TYPE at the New York Auto Show. (Photo by Neilson Barnard/Getty Images for Jaguar)

LG's New EV Battery Plant Is a Welcome News for Tesla
Tesla Giga Berlin's New Hurdle: It's Not Only the Gov't, but Now Tesla Itself
END_OF_DOCUMENT_TOKEN_TO_BE_REPLACED