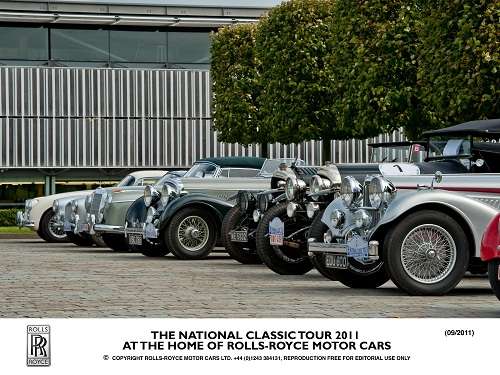 Over 100 Belgian auto enthusiasts, including the drivers of 30 vintage vehicles and their passengers, arrived at the home of Rolls Royce Motor Cars, Inc. last Monday, thus completing a six-day roadtrip that began six days ago, traveling from Kortrijk through Beaulieu to the Rolls Royce offices in Goodwood.
Advertisement

The event, known as the National Classic Tour, was organized by the International Automobile Federation and dates back to 2001. The cavalcade is only open to cars built from 1930 until The Beatles changed the known world in 1965, but of all makes. Participants this year hailed from Belgium, France, Luxemburg and the UK.

The Belgian auto enthusiasts have sought to create an event with fewer cars but greater conviviality. A measured, elegant journey in a region renowned for leisurely life with that special British touch.

A lush, green expanse where smooth roads wind through the relaxing and lulling countryside. It is an area drenched in history from the conquest of the Island by William to the invasion attempts of the summer of 1940, foiled by the British Royal Air Force through courage, the spirit of self-sacrifice, skill and patriotism.

Their arrival at Rolls Royce was quite timely as the prestigious automaker is celebrating its 100th Anniversary, and no doubt the Spirit of Ecstasy, as the famous flying lady hood ornament is known, is soaring with renewed luminescence.

The Belgian auto aficionados also have the nearby opportunity to visit the site of the Goodwood Festival of Speed, where the 50th Anniversary of the Jaguar E-Type was celebrated this year.

‘I am very proud to have brought my rally to this prestigious manufacturing plant in such a beautiful location,” said Jacques Bruyns, tour organizer. “I am also pleased to provide our enthusiasts with a tour that salutes Rolls-Royce for everything that the company has done for the British motor industry, and that celebrates the magnificent history of our European neighbour.”

“We feel very privileged to support this unique journey to the place where the heart of Rolls-Royce beats, in particular as the Spirit of Ecstasy is celebrating her 100th anniversary this year, added Stephane Sertang, Dealer Principal of the Ginion Group, sole Rolls-Royce Motor Cars dealer in Belgium. “The entrants of the National Classic Tour stand for decades of automotive engineering and our visit to Goodwood pays tribute to an icon of the automotive world - the famous Flying Lady.”

“I would like to take the opportunity to thank the participants of the National Classic Tour for taking time to visit us here at Rolls-Royce, and to celebrate their endeavour,” concluded Ashley Andrew, Regional Director Europe and South Africa, welcomed the car enthusiasts from Belgium. “The Tour arrives at an exciting time for Rolls-Royce - we have just announced an expansion of the Goodwood manufacturing plant - and are confident that the Spirit of Ecstasy is looking into a bright future.”