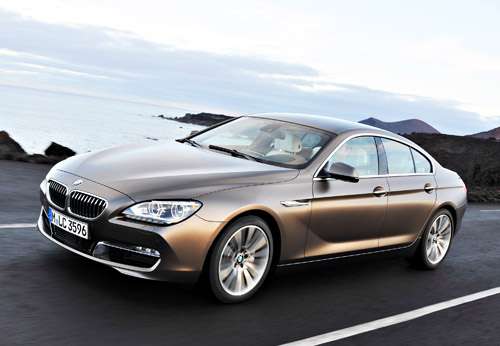 The totally refreshed BMW 6 Series Gran Coupe four-door Coupe will make its North American debut at the 2012 Amelia Island Concours d’Elegance, joined by the fifth generation M5 Sedan and its sibling, the 3 Series Sedan, at the upscale car show, to be held March 9-11 near the Ritz Carlton Hotel at Amelia Island Florida.
Advertisement

To commemorate the 60th Twelve Hours of Sebring, BMW will also bring the winning BMW 3.5 CSL from 1975 and the BMW V12 LMR from 1999 as part of their display. The race will convene at Sebring Raceway March 14-17 in Sebring FL

The all-new BMW 6 Series Gran Coupe is a new 4-door, 5 seat addition to the 6 Series line sports an elegant, crisply-sculpted, aerodynamic appearance based on the 6 Series Coupe, creating an ultimate driving machine seating up to five passengers in luxurious style. The looks of he coupe in a four door with room for four adults and the legendary performance and handling of a BMW sports sedan. The BMW 6 Series Gran Coupe will be offered as three distinct models in the US.

Since its inception in 1988, the iconic M5 has embodied the daily driveability of a luxurious BMW sedan with take your breath away performance. Now, the fifth generation of the BMW M5 redefines the performance possible in a luxury sports sedan.

In pushing the envelope, the new BMW M5 relies upon the most powerful engine ever in series-production model from BMW M GmbH coupled to a new high-torque 7-speed M-Double Clutch (M-DCT) transmission. The innovative Active M Differential optimizes power transfer to the rear wheels along with extensive enhancements to the chassis. Naturally a 6-speed manual shifter will also be offered.

The big V8 produces 560 hp with maximum torque of 500 lb.-ft. The ready to go power plant can do zero–60 mph in under 4.5 seconds. The new M5 uses 30 percent less fuel, while outputting 10 percent more power and 30 percent more torque – all this results in a significantly longer range between fill-ups. .

The BMW 3 Series Sedan is now in its sixth generation, taking it cues from the long history of the 3 Series and staying true to the genetics of the line. The new model will raise the bar for performance, handling, luxury and technology while he option of three available lines – Sport, Luxury and Modern – for the very first time.

Two BMW TwinPower Turbo engines are available for the sedan in the US. Along with to the inline 6-cylinder engine powering the 335i, a new turbocharged 4-cylinder is offered in the BMW 328i, rewarding the buyer with dynamic driving, yet significantly reduced fuel consumption.

A choice of 6-speed manual or a capable 8-speed automatic gearbox is available for either the 328i or the 335i with the new engine Auto Start-Stop function. Components of the BMW EfficientDynamics technology line-up such as Auto Start-Stop, Brake Energy Regeneration, and need-based operation of ancillary components (including an on-demand air conditioning compressor) add to the reduction of fuel consumption. A fresh Driving Dynamics Control, allowing the driver Comfort, Sport and Sport + modes also offers an ECO PRO mode, making the efficient use of fuel a priority over performance.

The 1975 Twelve Hours of Sebring was won by Hans Joachim Stuck and the 1999 win went to Jörg Müller. BMW is tied in sixth place overall with Toyota and Peugeot, having two wins apiece. The series’ titleholders are Porsche and Ferrari with 30 wins between them.

LG's New EV Battery Plant Is a Welcome News for Tesla
Tesla Giga Berlin's New Hurdle: It's Not Only the Gov't, but Now Tesla Itself
END_OF_DOCUMENT_TOKEN_TO_BE_REPLACED