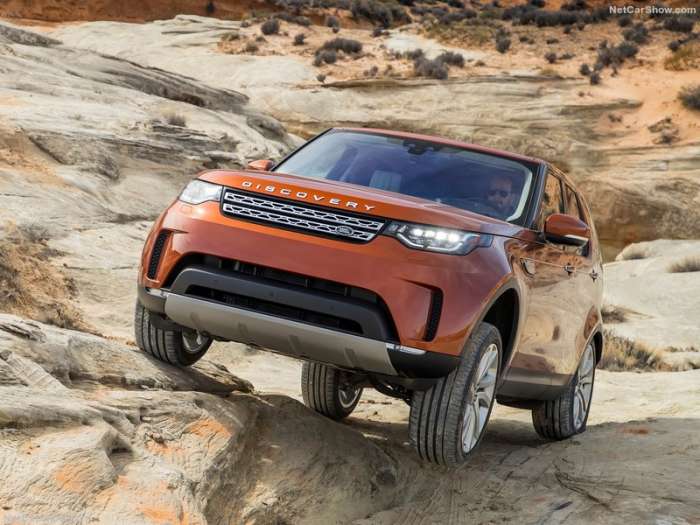 If you were disappointed with the redesigned Land Rover Discovery, don't worry. The Special Vehicle Operations division is working on turning the Discovery into a hardcore off-roader.
Advertisement

When the redesigned Land Rover Discovery was finally revealed ahead of last year’s Paris Motor Show, it left behind the previous version’s boxy styling in favor of a sleeker, more modern look. Land Rover promised it would still be quite capable off-road, but the new design would also offer better fuel economy, improved on-road behavior, and current technology. But if you’re a hardcore off-roader who was disappointed with the Discovery’s redesign, don’t worry. There’s already an even-more-extreme version in the work.

According to AutoExpress, Jaguar Land Rover’s Special Vehicle Operations division is currently developing a version of the Discovery that will be one serious off-roader. SVO’s head, John Edwards, spoke to AutoExpress recently, saying “I can’t tell you what the SV version of the Discovery will be like, but in my mind, it will be in between Paris Dakar and Camel Trophy. Somewhere in there is a product waiting to get out.”

At the moment, details are still scarce, but the British magazine believes the hardcore Discovery will be called the SVX. It also speculates that changes will include harnesses instead of seatbelts, more supportive seats, an upgraded chassis, chunkier bodywork, and off-road tires, as well as (possibly) more power.

When asked how long it would take for the Discovery SVX to hit dealer lots, Edwards would only say “we plan to introduce a new halo product every year for the next three or four years.” AutoExpress believes that points to a late 2017 or possible 2018 launch date.

Edwards also said he’d like to give the Jaguar F-Pace the SV treatment. “For Jaguar, the F-Pace is the only product that could work in the capability quadrant,” he told the magazine.

Is a Hardcore Discovery a Good Idea?

Considering how popular the Discovery has been with hardcore off-roaders who appreciate a few creature comforts, it’s understandable that the redesigned Discovery might not be exactly what they were hoping for. So it makes sense that Land Rover would let SVO create a version that puts the regular Discovery to shame. And with other Land Rover SVO products already offering track-focused performance, there’s also no reason to think SVO would build a sportier Discovery.

Still, off-roaders are a traditional bunch. Even if SVO builds a Discovery that puts Camel Trophy competitors to shame, the fact that it doesn’t look like it “should” could still end up being an issue. That being said, with so many milquetoast crossovers being sold these days, I’m always going to applaud an automaker that remains committed to offering off-road capable SUVs.

Ralph Spyer wrote on April 10, 2017 - 3:37am Permalink
I own a 2016 discovery for almost a year its a great S.U.V.
Charles wrote on April 10, 2017 - 5:44pm Permalink
When someone taller than Tom Cruise, which includes over 98% of the male and female population of the US old enough for a learner's permit, can sit in the driver's seat in straight posture without hitting his or her head on the roof or windshield frame, I will be interested. You don't tell me anything about these cars I need to know. Don't care about 0-60. Want to know about 60-0. Don't care about "sleek" - which is where all the problems start. Don't care if it will drive up the face of Mount McKinley. I just need to be able to drive on an ordinary city street and be able to see out the windshield. With 99.9% of automobiles today, all I see when I look forward is the top of the windshield frame. I'm only 6'1" - pretty ordinary today.