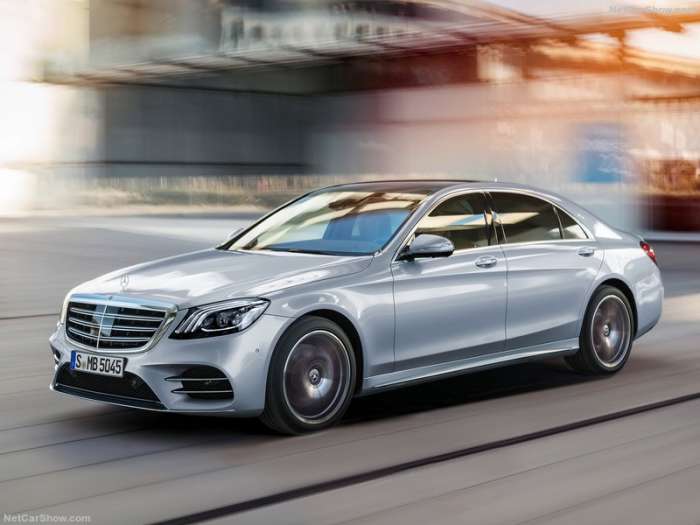 You'll be better off waiting for the 2018 version to go on sale.
Advertisement

When Mercedes-Benz introduced the 2014 S-Class, it was a massive leap forward. Not only did the new S-Class get a completely new look, it also got a significantly more luxurious cabin. Compared to the 2013 S-Class, the 2014 was drastically better in nearly every way. It was also far more luxurious than the competition, almost setting it in a class of its own. But if you’re thinking about buying an S-Class in the next few months, don’t.

That’s because Mercedes just showed off the S-Class’ mid-cycle refresh. It might not have a wildly different look, but if you can hold off until the 2018 models go on sale, you’ll get a lot more car for your money.

That doesn’t mean the 2018 S-Class looks exactly the same, though. Both the front and rear ends get mild updates, giving the new flagship a subtle but modern appearance. There’s a little more AMG GT on the front, as well as a few styling cues borrowed from the just-released E-Class. The changes aren’t drastic, but they help keep the design looking fresh.

There’s also a new entry-level model, the S450. Powered by a 3.0-liter, twin-turbo V6, it makes 362 horsepower. The S550, meanwhile, gets both a new name and a new engine. Now called the S560, it makes do with a 4.0-liter twin-turbo V8 that’s good for 463 horsepower. While that’s slightly smaller than the 4.7-liter V8 you get in the current S550, the new engine also makes an extra 14 horsepower. Thanks to cylinder deactivation technology, Mercedes says the 4.0-liter V8 is also 10-percent more fuel efficient.

If you’re looking for a little more grunt, the S63 has also been updated. It gets a 4.0-liter V8, as well, but this one makes a full 603 horsepower. That’s an extra 26 horsepower out of an engine that’s a full 1.5 liters smaller.

But while few drivers will notice those horsepower gains, they will definitely notice the updated interior and new technologies included in the 2018 S-Class. Most notably, you now get a three-spoke steering wheel instead of the previous car’s two-spoke design. Other interior updates appear to be much more subtle.

Instead, Mercedes has thrown most of its development money at adding advanced safety and self-driving features. This includes better camera and radar systems, as well as the ability to use navigation data to speed up or slow down based on how curvy the roads are. Mercedes claims it can also slow down for intersections, toll booths, and highway exits. You won’t be able to let it completely drive itself, but it appears to be a step in the right direction.

If you’re itching to pick up a new S-Class, don’t worry. You won’t have to wait long for the 2018s to show up on dealer lots. Mercedes says they’ll be on sale sometime this fall.