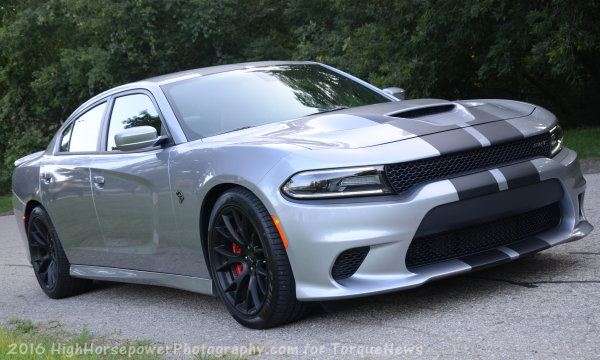 The Modern Muscle Car Wars and How They Have Changed

One of my favorite moments in the history of cars is the muscle car wars in the mid 60's and early 70's. Detroit's assembly lines were pumping out high horsepower cars that were marketed towards the youth of America (Baby Boomers). The race was on to see who could be the fastest.
Advertisement

However, times are different. Cars have more constraints with emissions, safety, and many other areas. Not to mention the common platform cars use today. But if you take notice, we are on the verge of another muscle car wars.

Plus, a dealership in Lebanon, OH is giving its customers high performance Mustang GT's for $40,000. Equipped with a Roush Phase 2 supercharger kit, these Mustangs crank out 727 horses.

Some other contenders include, surprisingly, Jeep and Cadillac. I personally don't see Jeep as much of a performance brand, but that's what makes it interesting.

Jeep recently announced that it will be starting production of its Jeep Grand Cherokee SRT Hellcat in July of 2017. Performance numbers are expected to be similar to the Hellcat Charger/Challenger. Cadillac also has produced a 640 HP CTS-V, capable of 0-60 times of 4.6 seconds. Certainly, a quick Cadillac.

In my opinion, this feels like the onset of another muscle car war. As a young car enthusiast, this excites me. I'm also interested to see how the cars would be marketed, and price. Sorry, a new car costs more than $3,500.

The way these cars will have to go about making muscle in a much different way. In the 60's, you threw dual carburetors, dual low-restriction exhaust, or you bore out an existing motor to more displacement. "There is no replacement for displacement."

In the sales department, I wouldn't be surprised to see the youth market of today being the majority buyer. The Mustang already has a big following by the youth market, as well as the Chargers/Challengers.

Interestingly enough, it would be a great marketing strategy to market these cars to Generation X, who would've grown up with the 60's muscle cars as their first car, or perhaps grew up with their parents owning one of those fast muscle cars.

This also leads me to speculate if any other manufacturers get on board with this. From what I believe Chevrolet, Ford, and Dodge will be the biggest contenders. Only time will tell how the sales of Jeep are when they release its Hellcat to the public It would be interesting to see if Buick were to jump in with a high-performance Regal, or LaCrosse. I can't see this happening anytime soon.

In my opinion, we are in the midst of another muscle car war. I would just like to see some more performance in these muscle cars. Plus if you appreciate these modern muscle cars, you should check out your local car show and admire the history these great cars have.