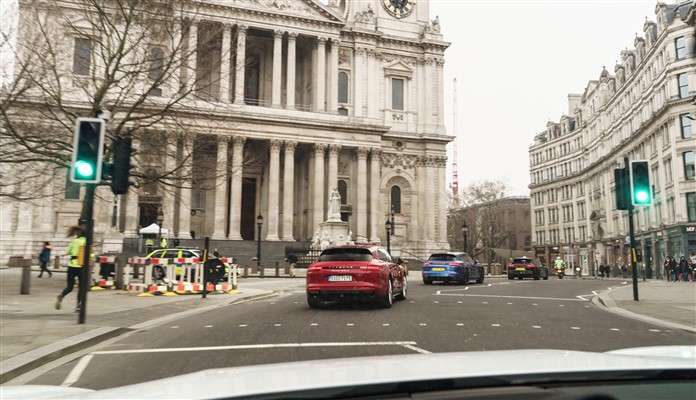 Why would you use 3 Panameras to move gold? Because you can and because they did

When Baird decided to move nearly $14,000,000 in gold they decided to use a rather unique method to move the fortune. They asked for Porsche's assistance and used three Panamera Turbo Sport Tourismos, and lots of security, to pull off the transfer without a hitch.
Advertisement

Not wanting a high profile, Baird chose vehicles with profiles so low that no one would have the merest inkle there was gold passing by. About the only thing, pedestrians and other drivers would have seen was a parade of three Porsche Panamera Turbo Sport Tourismos, one of them an S-Hybrid.

All of this went down last week on 12 miles of London highway and city roads.

According to the VW enthusiast site, VWVortex, using the three Panameras, Baird was able to move 660 pounds of newly refined gold.

Of course, it’s okay because it happened not too long ago, according to the VW enthusiast site VWVortex. It seems that Baird & Co., a top British bullion merchant, and gold refiner, wanted to move 24 bars of gold 12 miles across London. And rather than use the armored car, Baird asked Porsche if it would handle the shipment.

Porsche was up to the task

Up to the task, Porsche said yes, it would move the 24 bars of gold the 12 miles. Baird chose the different gold transport to keep risk to a minimum. At the same time, they had to ensure the $13,787,800 in pure gold moved efficiently and quickly to Baird’s Hatton Garden showroom. Indeed, the longer it took to move the gold, the higher the risk.

Baird and Porsche decided to use the three Panamera Turbo Sport Tourismos as the mules that would carry the 660 pounds of precious metal to the showroom. Each vehicle met the requirements for performance and space needed for the golden mission. The cars had to be capable of carrying four adults plus two specially designed bullion crates.

Heavy security, not evident but there

So, under strict security that included a helicopter and heavy ground staff presence, the three Turbo Sport Tourismos completed the trek in 40 minutes precisely as planned.

Nick Hammond, Baird & Co. director, said they “had a very large shipment of gold to transport – which is quite rare.” Any vehicle used to handle the transport had to be “absolutely reliable, to be stable and to be more than capable of carrying the gold with capacity – in terms of performance – to spare.”

Frankly, they did not want “the vehicles anywhere near their limits, which is asking quite a lot. And, despite the phenomenal weight – and the density of the weight – Panamera had to carry, they performed impeccably.”