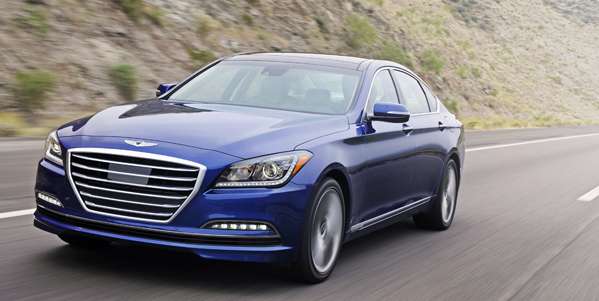 Hyundai has launched a new division. No longer is the Genesis just a model; it is Hyundai's march to the future of upscale.
Advertisement

Do you remember when Hyundai was just a set of wheels? When the automaker arrived here, Hyundai was willing to do anything to crack the U.S. market. To do so, the automaker did something totally contrary to the rest of the automotive world. Hyundai, instead of starting high and moving higher in terms of price, offered a low-cost car. At the time – 1986 -- when the average car cost $9,999, Hyundai went the other way, offering a well-built, low-priced alternative, priced at $4,995.

It was a strategy that worked and helped to establish the automaker as the manufacturer of reasonably priced, yet reliable wheels. Reviews at the time, pointed this out as the brand sales began to grow.

For the next few years, Hyundai refined and expanded its offerings. Hyundais of the mid-90s looked startlingly like mini-Mercedes and while they didn’t handle, ride or drive like an M-B, they were great at what they offered. They provided reasonable transport at an affordable price.

There wa also an exciting, yet subtle, transformation taking place throughout this time at the automaker. Hyundai was becoming more refined and was moving gradually upscale. The culmination of the automaker’s move to the upscale side of the force came in 2008 when the first Genesis was introduced. At its introduction, the automaker announced the Genesis was to be a near-luxury marque whose features, fit and finish and standard offerings would reflect its status.

Don't Miss: 5 Reasons Why the Hyundai Genesis 5.0L Package is Worth Every Cent

Pretty quickly, the Genesis established its status – and quality. The automotive world certainly noticed as the marque received not only rave reviews, but it also won awards such as the North American Car of the Year award, as well as others. Hyundai was reveling in the great news and, all the while, demand stayed up.

Hyundai brought its replacement out in 2014, again to the plaudits of the automotive press. The Genesis went on to become a self-contained success story. Apparently, buoyed by the line’s success, Hyundai added another arrow to its quiver when it decided the Genesis would be spun into the automaker’s first independent, upscale offering not sold under the Hyundai banner. Instead, the automaker decided that it would make Genesis a separate upscale division.

In starting out now, the division already has two credible products to sell, the 2017 G90, a new, full-sized sedan and the G80, another remake of a Hyundai product. To spin out a new product line quickly, it is a necessary step. While plans call for Genesis to add SUVs and couple, plus all the features that customers expect of an automaker, it will be at least year-and-a-half until the new G70 rolls out. The G70 will be Genesis’ first all-new branded vehicle. So, rebadging two models is the only way to go.

In essence, it gives the automaker cover to plans such items as dealer network, marketing and the like. Already, the new brand has deals with the NFL and PGA, two respected sporting venues.
Genesis has a way to go before it is totally ready for prime time. GM Erwin Raphael has no problem with his limited inventory because, as he reasons, they are in a building phase right now. He recently indicated he would rather have it this way because it gives them a chance to build on the brand, rather than having to build the brand and sell new models at the same time.

Though it has just been launched as a separate brand, the planning for the Genesis marque began with the release of the rear-wheel-drive near-luxury sedan eight years ago. Internal conversations began at that time that continued for several years, through the launch of the second generation Genesis in 2014 until now with the conversations over. And, now the real trench work begins for Raphael and crew.

As noted, they already have two powerful sponsors lined up, the NFL and PGA. However, they still are building out their dealer network. Rather than using the Hyundai dealer network, Raphael has said he wants to cull the number of dealers to the numbers he believes reasonable, about 300, not quite to Lexus dealer levels – 236 – but still quite lean.

Interestingly, 350 Hyundai dealers have already committed to the new line. They are willing to build the standalone facilities for the new marque. To support them, Genesis will be building its customer and service training facilities, and they will be ramping their marketing efforts, especially as the launch of the G70 approaches.

The G70 represent a challenge for the automaker. At the moment, Genesis is selling the full-sized G90, a revamped version the earlier model. It is a rear-drive sedan that is powered by a twin-turbo V-6 that delivers excellent performance. And, the new marque offers the G80 as a smaller, companion upscale sedan.

G70 Will Be The Real Test

The real test comes when the G70 arrives. The G70 faces heavy pressure even before it arrives on the scene. The target market is one of the most highly contested, the compact sports niche. The first model will be a sedan; the second will be a coupe. Plans call for a compact crossover based on the platform.

The G70 is the backbone model for Genesis. The automaker hopes it will pull lots of business from the target demographic, younger, more affluent buyers.

Given its importance to the new brand, Raphael, and his team are concentrating on getting everything in shape for its arrival.