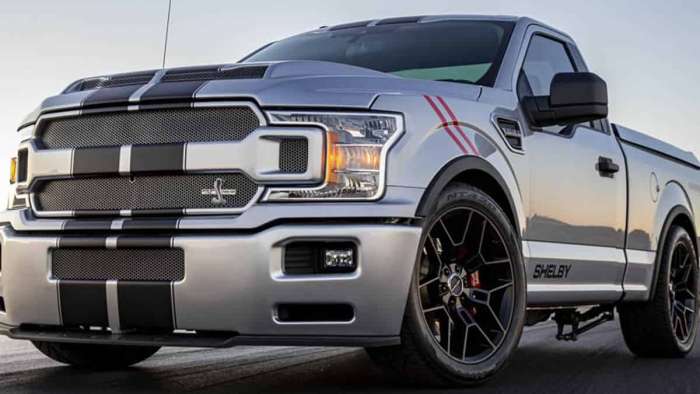 Shelby American has come up with an F150 concept truck that may be a worthy successor to the famed Ford Lightning SVT F150, the Shelby Super Snake Sport F150. It is quite a pickup.
Advertisement

For a long time, the three initial SVT meant something special in the Ford World. They stood for Special Vehicle Team, a group devoted to taking regular vehicles and turning them into something special. For example, there was the Taurus SHO back in the 80s and 90s. The SHO began life as a mild-mannered Ford Taurus, powered by the 3.0-liter Vulcan V6. By the time the SVT finished with it, the SHO was a real performer, capable of turning quarter-mile times in the 13s. It featured tweaks to the suspension and handling package that made the SHO a pleasure to handle. It was everything the Taurus could have been and more. Then there was the Ford F150 SVT Lightning.

The Lightning is remembered fondly by everyone who looked at the imposing F150 first-gen version with its 5.8-liter V-8, pulled from the F-350. The tranny was a four-speed. The first-gen Lightning appeared from 1993 to 1995. Ford discontinued it for a couple of years and it reappeared in 1997 as the second-gen supercharged Ford F-150 Lightning. It featured extensive mods to the body, handling parts, and suspension. The SVT Lightning sold until 2014 when the F150 Tremor, which was supposed to be the successor to the Lightning, appeared. The F150 Tremor wasn’t a great seller to the point that the Lightning name reappeared in the 2019 model year.

And, now there’s a pretender to the throne of the F150 Lightning, the Shelby Super Snake Sport F150. Manufactured by Shelby American, it debuted at this week’s SEMA (Specialty Equipment Manufacturers Assn.) show. The Ford Authority called the Shelby Super Snake Sport F150 concept, “a reincarnation of the Lightning. Ford has a major display at SEMA with more than 30 concept trucks including the Ford F250 Tremor, a heavy duty F-Series pickup that has been warmly received.

The Shelby uses a lowered suspension and a supercharged 5.0-liter V-8 for its go-power. The combo of the supercharger and the V8 delivers 755 horsepower and robust and burbling exhaust note. Shelby has revised the Super Snake Sport’s exterior so that you can’t mistake it for anything but a performance pickup.

’King Of The Road’

Here’s a more detailed look at the specifications of the Super Snake Sport F150. As noted, the performance pickup receives its go-power from the supercharged 5.0-liter Ford V8 that cranks out 755 horsepower. The Super Snake stops quicky and surely thanks to a six-piston front braking system. The front suspension has been tweaked using coilovers and traction bars.

Interior Has A Unique Dash Plaque

See you in my next story where I am discussing why IIHS named 2019 Ford Edge as its Top Safety Pick winner.