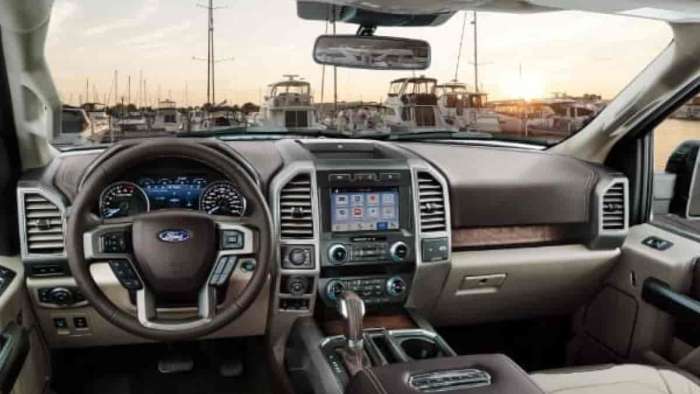 As the weeks move on, there's more information coming out of the Blue Oval regarding the next-gen F150. One of the most current rumors is that there will be a new center display size.
Advertisement

Detail by detail, some outlines of the next-generation Ford F150 become clearer. For starters, the new model will likely roll out before the new Bronco, which had been scheduled to debut first. According to comments we have seen at Torque News from outlets such as The Ford Forum the reasons for the product launch flip has been because the new Bronco’s front end fared poorly in focus groups.

Further, there have been rumors that there will be a new pickup based on the Bronco available within a year or so after the Bronco SUV appears. It means that if the rumor-mill is correct, the new Bronco-based pickup will be available sometime in the 2022 to 2023 model year timeframe. Interestingly, this could be an essential version for Ford because there are reports that this will be the challenger to the Jeep Gladiator pickup, an important FCA product.

The Bronco will be an essential vehicle within its segment. It is unlikely to take the sales crown from the Ford F150. Instead, it is likely to be a model that will bring conquest sales as it takes, Ford hopes, takes them away from the Jeep. Meantime, competition for the Ford F150 waits in the wings, eager for the model to make a critical misstep that will allow the competitors to get a foot through the door of increasing market share. Given Ford’s mastery of this segment of the pickup market, the development managers likely know more than just a bit about keeping the Ford F150 as the market’s number one pickup. And, while we know changes are coming for the next-gen Ford F150, there is a certain reluctance, at this point, to discuss the information about the upcoming changes. However, some exciting rumors are coming out, even at this early date.

One thing that seems fairly certain is that Ford there is a significant change coming in the size of the display that will sit in the center of the dash panel. The new screen will likely be either 12 or 13 inches wide. However, it won’t be as deep as some of the displays already out there. For example, some touchscreens extend above the top of the dash. However, the Ford F150 display will likely have a row of buttons above the screen. The row of buttons will control many of the truck’s functions. Since that row of buttons needs space, it will likely limit the Ford F150 display to five inches or so deep. In fact, given the importance of the truck lineup to the corporation’s bottom line, it is more than likely that the automaker will be very reluctant to make significant changes to the placement or size of the screen given its importance to the manufacturer’s bottom line.

As noted in Torque News the other day, sources have been buzzing about the extension of the Tremor truck option to the Ford F150. The reason that there will likely be a Tremor option is that the Super Duty market has been abuzz about the option since the announcement in June that there would be a Tremor available on F250 and F350 Super Duty pickups. It Isn't The First Timethe Tremor option has been a Ford F150 offering. The last time the automaker offered this option in the Ford F150 lineup was five years ago.

Among the other possible changes coming in the next-gen Ford F150, sources noted that it is more than likely a hybrid will roll off the assembly line. What is not known is whether either the Tremor or the hybrid will be part of the next-gen redo or they will appear as 2020 models.

Follow Marc Stern, the Ford F150 Reporter for Torque News at at @iraradioguy or on Facebook at mstern001..

Marc Stern wrote on July 22, 2019 - 8:03am Permalink
What would you like to see in the next-gen Ford F150?
Dennis Swartz wrote on August 2, 2019 - 12:34pm Permalink
In 2019 they have eliminated white gold as tax exterior color. Other than white they need to offer more lighter exterior colors to choose from . Everything is dark exterior colors