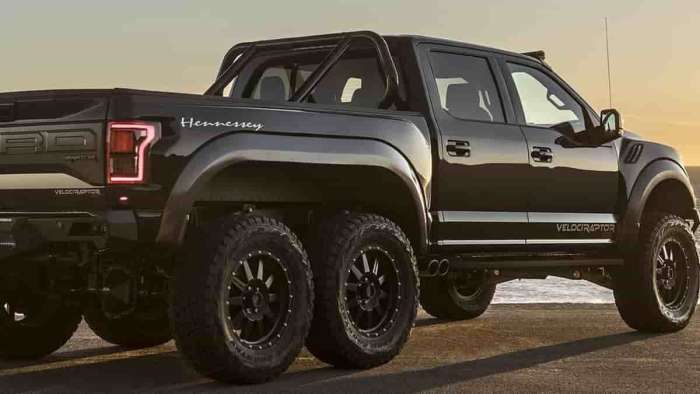 While Hennessey (and quite possibly Chevy) touts its 6X6 Goliath, there's another 6X6 quietly competing and, some say, winning. It's also produced by Hennessey Performance engineering and it is called the VelociRaptor. It is based on the Ford F150 Raptor.
Advertisement

For most of this week, the world of trucks has been excited by developments from Hennessey Performance Engineering, known primarily for its unique models developed on the Ford F150 platform. This week Hennessey introduced Goliath to the world and already sides have been chosen for what could be a new battle of the Gargantuans -- Goliath versus the Hennessey Performance VelociRaptor. Goliath is based on the Chevy Silverado 1500.

From Ford F150 Raptor To VelociRaptor

Indeed, Goliath has been trending on message boards, forums, and Facebook. One of the first things to have been called out has been the power output of Goliath, 450 horsepower. Some had said that 450-horsepower seemed a bit light for the 6X6 pickup, while others have given it grudging respect. Still, others have been as excited as kids at Christmas. Lost in the conversation about Goliath has been another six-wheeler, Hennessey’s VelociRaptor 6X6, based on Ford’s F150 Raptor. It is Goliath's chief competitor. From the amount of comment, so far, this is a segment that stands out for the competition that is increasing. For example, there are other Ford F150 pickup market segments that offer some neat upgrades, like the Cincinnati dealership that is reviving two-tone Ford F150 pickups, a staple from the late 1970s. Ford F150 pickups are being upgraded all over. In Cincinnati, you can have a two-tone look for your Ford F150 and never lift a paintbrush.

Meanwhile, back in the land of the Goliaths, the Hennessey VelociRaptor is a more powerful vehicle. Though the engine is only 3.5 liters, it is what Hennessey has done with it that makes the VelociRaptor, a desirable vehicle – if you have the spare $349,000 needed to get this particular concept off the drawing board. That price includes not only the base Raptor SuperCab (2017-2019) plus:

You might think that Hennessey might be giving in to a bit of bragging about its VelociRaptor. However, it doesn’t seem that way. Instead, it looks like the performance tuner is being conservative. Frankly, Hennessey believes the Ford Raptor will be “one of the best all-around trucks ever built.”

The truck tuner said they are “excited to help take it to the next level both in terms of performance and exclusivity.”

One can see why Hennessey is so excited. The optional upgrades include such items as the Brembo front and rear brake upgrade. And, there are the larger wheels and tires. There are also the lighting upgrades, featuring LED lights. Hennessey also offers, among other items, bespoke interior treatments, and electronic upgrades. Plus, Hennessey will also offer armoring.

If you are interested in the Hennessey VelociRaptor, you can order it from Hennessey Performance or through select Hennessey/Ford dealers.