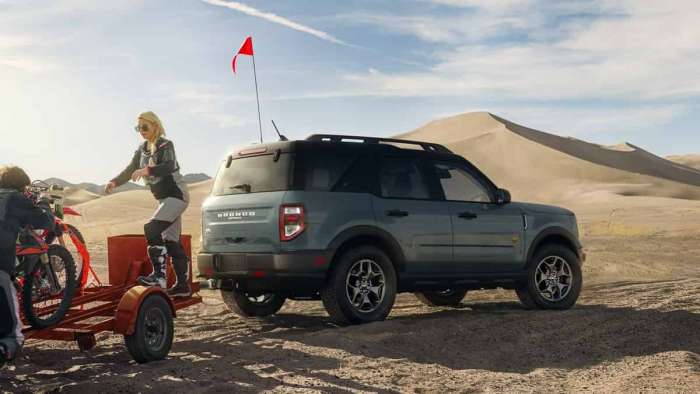 Ford's 'Little Bronco,' The Sport, Is A Great Addition To The Lineup And The Brand

Ford's latest key move is the revival of the iconic Bronco, one of the first modern successful mass-market SUVs. Introduced in 1965, the Bronco was a winner from the start. Indeed, it won the first -- 1969 -- Baja 1000, which also helped to establish its identity. In the current reintroduction of the Bronco, it has expanded the line, adding a second set of doors (the first Bronco was a two-door), and a new, smaller model that we discuss today.
Advertisement

Let’s face it, over the last couple of weeks Ford’s Bronco has received most of the hoopla. And, why not, the new Bronco is a renewal of an iconic nameplate that existed in the Ford orbit for three decades where it established quite a record.

My colleague Jimmy Dinsmore discussed the the last week in the world of the Bronco and what it all means.
Ford Bronco Wins Baja 1000

For starters, the original Bronco won the first Baja 1000 in 1969. The factory-backed Bronco was the first manufacturer’s SUV to win the premier off-road race. The win also helped to cement the Bronco’s reputation as a tough truck. Interestingly, the original Bronco, which first went on sale in 1965, was the first two-door SUV on the market and continued through several generations as a two-door. Jimmy Dinsmore asked the question of the new models, wondering if the Bronco isn't cannibalizing sales of existing models.

Today, it is no longer just a two-door as it is available as a two- and a four-door with standard four-wheel-drive. The Bronco was just reintroduced as a brand by Ford with three models. There are now two full-sized models and a smaller sibling, the Bronco Sport. And, in another first, Disney and other networks joined to bring the Bronco and Sport reveals.

Unlike the full-sized Bronco, Ford based the smaller Sport on a carlike platform – the Escape – that features unitized construction, not the body-on-frame of the full-sized versions.

The smaller sibling to the larger Broncos, the Sport features standard 4X4. As the company notes, the Sport joins the rest of the Bronco brand “with its own idea of fun” as the smaller SUV is “engineered to handle whatever weekend adventure its owner has in mind,” the company said in a statement.

“Bronco Sport has the toughness and smarts to help turn off-road novices into 4X4 pros,” Hau Tha-Tang, Ford chief product development and purchasing officer, said. He continued that “Bronco Sport embraces the needs of outdoor enthusiasts – every inch of it was designed and engineered with weekend adventurers in mind.”

When the Bronco Sport design team first put things into the computer system, the first item they came away with was a pair of mountain bikes. The designers wrapped the design around two mountain bikes standing up in the cargo area with two cyclists upfront. The Bronco Sport is available in five trim levels:

A special off-road trim to look at is the Sasquatch which gives the Bronco better off-roadability. I wrote about it here. 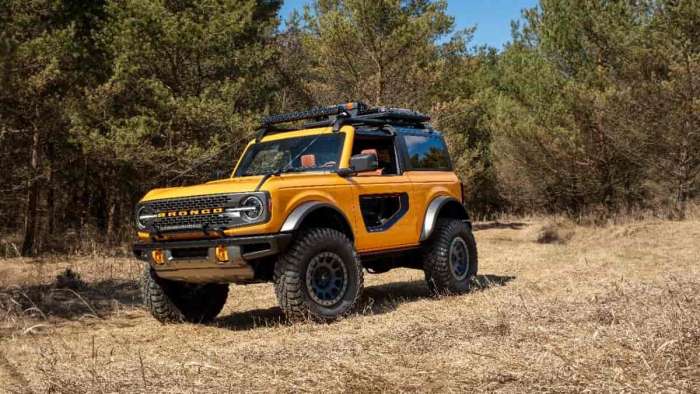 Indeed, if you are excited by the prospect of picking up a Ford Bronco Sport, you can reserve one through ford.com for a $100 reservation fee. Plans call for Bronco Sports to make their appearance at dealerships late this year.

The Bronco Sport, like its larger sibling, delivers the goods. For example, the 4X4 provides you with stable footing on sand, snow, mud, and more. For maximum off-road capability and long-term durability, the Ford tested the Sport in extreme conditions in such as places as California’s Johnson Valley Desert. Ford tested the Bronco Sport as part of Built Wild Extreme Durability Testing.

Badlands and First Edition models pack an advanced 4X4 system with a class-exclusive twin-clutch rear-drive unit for better road performance – similar to a traditional mechanical locking differential. The system can divert virtually all rear axle torque to either rear wheel, setting it apart from any other vehicle in the non-premium subcompact utility segment.

Bronco Sport’s suspension can take on rugged terrain. It is complemented by Ford’s trail technologies. The small SUV’s Terrain Management System™ with up to seven available GOAT (Go Anywhere/Anytime) codes helps drivers “go over any type of terrain” and in various conditions, the automaker said in a release. Standard modes include:

Available on Badlands and First Edition trim levels, the added shift modes mean you will be able to maneuver around rocks and ruts easily and climb grades that leave more standard 4X4 crossovers waiting for a winch up.

All Sport models feature an independent front and rear suspension that was engineered and performance-tested in demanding environments across the country. The suspension is optimized to help drivers confidently maintain vehicle stability while aggressively taking on rugged terrain.

Class-exclusive Trail Control™ technology furthers the vehicle’s off-road prowess. The available feature enables a cruise control-like setting up to 20 mph forward and six mph in reverse for vehicle-controlled throttle and braking, letting the driver stay focused on navigating the trail.

For adventurers taking on rough and rocky terrain, the small SUV’s design includes made-for-the-trails departure, approach, and breakover angles. An available class-exclusive front off-road camera with lens washer serves as a spotter. The camera also helps with better visibility of the trail ahead, displaying the video on the center stack-mounted touch screen.

Four steel bash plates reinforce off-road capability is further reinforced by four steel bash plates, plus available frame-mounted front tow hooks that can individually withstand static loads up to 100 percent of the gross vehicle weight. Badlands and First Edition can wade through up to 23.6 inches of water.

Staying true to the DNA of the first-generation Bronco, the all-new Bronco Sport SUV pays it forward with modern, heritage-inspired style, agile off-road architecture, and optimized suspension for better control in all environments.

The Badlands and First Edition series are powered by a 2.0-liter EcoBoost® engine that produces a targeted best-in-class 245 horsepower and 275 pounds-feet of torque for high-speed off-road performance*. Base, Big Bend, and Outer Banks series feature the proven 1.5-liter EcoBoost engine with a targeted 181 horsepower and 190 pounds-feet of torque*.

Both engines are paired with an eight-speed automatic transmission, while Bronco Sport Badlands and First Edition add SelectShift® with steering-wheel-mounted paddle shifters to help drivers maximize control both on- and off-road. A cooling system with added transmission and rear-drive coolers keeps 2.0-liter models running strong over tough terrain.

The Bronco Sport SUV’s design inspiration links to the all-new Bronco halo model. Its rugged design attributes include signature encapsulated cartridge grille, round headlamps, clean, flat bodysides, and timeless proportions that enable the short front and rear overhangs required for off-road maneuvers. Tough unpainted finishes smartly cover exterior contact points, so the vehicle is ready for almost anything the rough and tumble outdoors can throw at it.