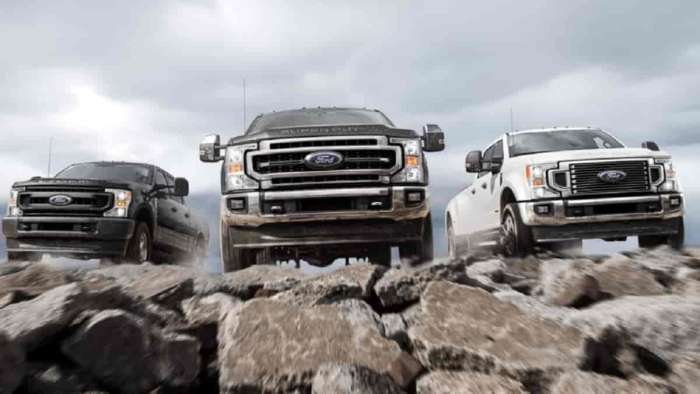 Ford announced another recall this time involving its Super Duty pickups. The recall involves airbag housings that break apart they are used. It is similar to the problems that other airbag housings have experienced during the Takata scandal/recall.
Advertisement

Over the past decade or more, airbags and airbag housings have been as much a part of automotive news as anything else. The reason has been the Takata airbag safety recall.

For those who may not have followed the safety issue/scandal, the whole thing began in the 1990s when the number two – at the time – airbag manufacturer decided its airbag housings needed changes. There were engineering studies, studies, and more, which seemed promising. However, looking at costs, the manufacturer decided to keep things the way they were, though there were some changes over time.

The manufacturer decided to keep its tried and true methods in place, using ammonium nitrate as the propellant, though the ultimate design of the airbag housings did change somewhat.

That said, Takata began more than a decade of airbag deflection beginning in 2000. The manufacturer, responding to NHTSA pressure, did issue recalls from 2000-2010. Compared to what was coming after 2015, they were small potatoes when NHTSA ordered major recalls to fix exploding airbags.

Indeed, Takata tried to deflect and keep any problems with its products under wraps, but the manufacturer couldn't. Ultimately, the scandal/recall involved 19 automotive manufacturers and millions of vehicles. Indeed, across the globe, as many as 55 million vehicles were involved ultimately (and still are).

What Caused The Problem?

Why was there a problem with Takata units? It's simple: the manufacturer maintained two plants in Mexico where problems were paramount. The plants routinely turned out front airbag housings that contained contaminated parts with dirt, dust, and other detritus. In turn, these problems rendered the products suspect. Also, there were problems due to heat and humidity issues.

It turns out that the airbag housings were responsible for at least 17 deaths in the United States as the airbag inflators manufactured by Takata proved faulty. Indeed, they were not only contaminated, but over time, as they aged, they became more and more unstable due to the ammonium nitrate propellant. As they became unstable, the airbag housings exploded, sending shrapnel scything through the interior of vehicles with deadly effect.

Across the world, there are at least another dozen deaths that joined the 17 deaths in the United States. In sum, more than 26 victims have been claimed by exploding airbag housings since the recall/scandal became headline fodder. There were more than 200 serious injuries, as well.

And, with 19 significant manufacturers involved to the tune of 55 million or more vehicles and airbag housings, it is little wonder that carmakers are very sensitive on the topic of airbags.

Thus, Ford has issued a small recall of its Super Duty pickups (F-250/F-350) regarding airbag covers. According to the National Highway Traffic Safety Administration (NHTSA) notice, the automaker found that the airbag covers on five Super Duty models may break apart, hurling fragments toward the occupants – sound familiar? – thus increasing the risk of injury.

Meanwhile, the automaker announced another recall involving 2021-2022 Bronco Sport and Escape models for problems with the rear brakes.

You would think that the auto industry would have put this issue into its rearview by now, but 2022 Super Duties have been impacted by a problem similar to the ongoing Takata safety recall/scandal.

That said, NHTSA has announced the recall of five Super Duty pickups for the issue outlined above. The reason for the recall is that the automaker doubts the strength of the driver-side airbag cover.

Owners of the affected pickups will be notified of the issue in about a month. Dealers will replace the driver-side airbag module free.

For further detailed information on the Ford airbag issue recall check out this site.