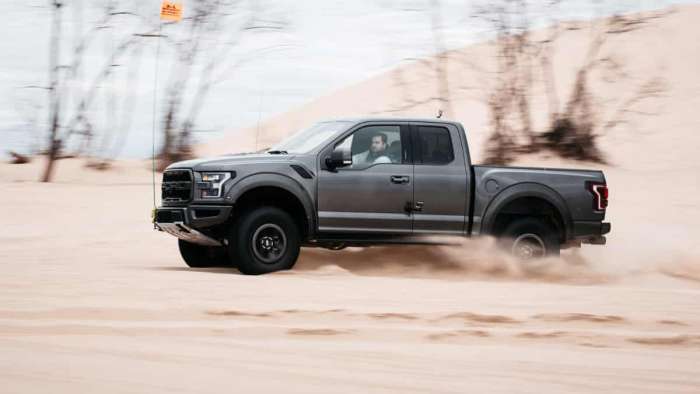 Here’s a good question, how fast is fast? Take a vehicle like the Ford F150 Raptor, a behemoth meant for off-roading at higher speeds than regular or desert racing, California’s Baja 1000, for instance. If you are pushing a Raptor around is 80 mph fast, or is 90 mph quick, or is 100 mph moving? It seems that the members of the crew at Florida’s Johnny Bohmer Proving Ground asked that question not too long ago. And, after asking the question, they set out to find the answer.

At first, they might well have asked: “What to do? What to do?” After that, and and likely some sessions at a whiteboard, where they likely settled on the pickup they were to use – the Ford F150 Raptor. The planning began in earnest.

After chewing over any number of ideas, they ended up with a working action plan for the specialized pickup’s high-speed run or runs. The ultimate plan was simple enough in execution: they cleaned out a 2.3-mile straight, making it wide enough so the F150 Raptor would fit. Next, they started the Raptor; took it to the test track; revved it up, and off it went at top speed down the track. Throughout the 2.3 miles, the pickup truck reached speeds of 134 mph. Meantime, there are other places where things aren't what they seem..

Watch the video to see how things came together and to hear about the run.

Imagine a full-size pickup, the size of the Ford F150 Raptor, which has been specked out for off-road use and desert racing, moving down a test track at faster than two-miles a minute. That would make some sight, wouldn’t it? And, you have to admit that the Raptor would be moving right along. Just about every part of the Ford F150 Raptor would be used quite well. That would include the Raptor’s standard turbocharged EcoBoost 3.5-liter V6. The EcoBoost powerplant puts out 450 horsepower to the wheels. To put it another way, the engine cranks out about 510 pounds-feet of torque or more than enough to pull up a stump or two on its way down the test track. To handle the power of which the Ford F150 Raptor is capable, the manufacturer uses a standard 10-speed automatic.

One might think that a 3.5-liter V6 is a bit on the light side to for a vehicle the size of a Ford F150 Raptor. The Raptor test truck, according to a report in The Ford Authority, has been variously described as weighing 5,525 pounds. However, another description gives the Raptor tester a weight of more than 7,000 pounds. At either weight, the 3.5-liter V6 is easily able to move the Raptor out smartly. The reason, speculates the publication, is simple: the 3.5-liter powerplant is capable of delivering huge amounts of power, especially if its tuning was for power. And, the test crew did admit that the ECU (Engine Computer Unit) had been updated for the high-speed run. However, no one said whether the ECU update was due to the need for power or because they wanted to knock off the speed limiter. Whatever the reason, someone finally has been able to put a number on the top speed of Ford’s F150 Raptor, at least for the time being. Who knows if and when someone else will come along with a different top-end figure? Until that day, though, 134 mph is quite a respectable number, isn’t it?

Though there was no direct confirmation from the support team as to whether the flash helped the power heading to the wheels, it is entirely possible that there was an ECU flash to obtain a power increase. However, The Ford Authority suggested that the ECU flash was used to remove the speed limiter, which is unknown outside the Johnny Bohmer Proving Grounds crew.

Follow Marc Stern, the Ford F150 Reporter for Torque News at at @iraradioguy or on Facebook at mstern001.

Tesla-Funded Research Reveals One of The Biggest Mysteries of EV Battery
Tesla Tesla Buyer Nets a Whopping $12,000 Discount After Asking for Reduction
END_OF_DOCUMENT_TOKEN_TO_BE_REPLACED