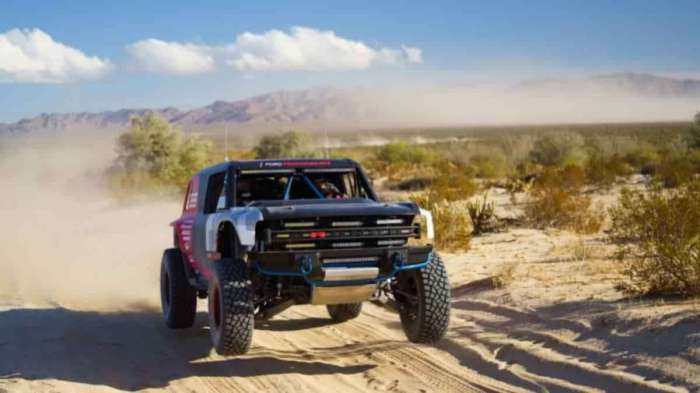 Though they set out with the best of intentions at the 2019 Baja 1000 off-road enduro held recently in Baja California, the team running the Ford Bronco Prototype R just couldn't compete with rain, mud, dodge-'em-car traffic, and mechanical problems. The result was a DNF (Did Not Finish). Don't worry they are planning a return in 2020's enduro, this time with a better-prepared entry.
Advertisement

When the green flag dropped on the 2019 Baja 1000, one of the vehicles that set out on the grueling run through some of the toughest terrains in the world was a Ford Bronco Prototype.R It DNF’d. There were several reasons it didn’t finish, according to a recent Trucks.com piece quoted by the folks at Autoblog, but mostly it was the rain that played havoc with the Ford Bronco Proto R. The Ford engineering team fielded the Ford Bronco Prototype R to mark the automaker’s win in the Baja 1000 50 years ago. It also looks like Ford is about to drop the prototype label from the Bronco as Torque News reporter Jimmy Dinsmore details in Torque News.

Aside from the lousy weather, what else troubled the Ford Performance effort? As Autoblog explained, “The Bronco endured a wild bunch of issues in a wild edition of the Baja race.” But, there was more to this story than just the bumper car aspect of the event – a truck trying to climb the walls at Matomi Wash couldn’t cut it and landed on the Proto. Believe it or not, there was no damage to Ford Bronco Proto R in the dust-up, but they had to wait for a third vehicle to separate the tangle.

It must have seemed at the time that there was lots of truth to the old saying that when you are in trouble, it never rains, but it pours. Indeed, the quagmire caused by the rain kept hosing the Bronco R Prototype as problem after problem needed repair. For example, the Ford Bronco Prototype R lost a lower control arm near mile 500. Of course, the techs had to repair that issue so the Bronco could go on.

Meanwhile, the cooling fan (an aftermarket device) began having issues causing the Ford Bronco Prototype R to overheat. It took hours to fix this issue. This was the proverbial straw the broke the camel’s back. Team leaders decided there was no point going any further. The section they were about to enter was lonely and complicated, so rather than go any further, they pulled the plug.

As noted, aside from the bumper-car-dustup in the Wash, the rest of the problems with the Ford Bronco Prototype R were mechanical. And, it’s fair to question if the short prep time – five months -- to create an entirely new off-road racer might have been a significant contributor to the Bronco R’s issues. The engineers with Ford Performance set up their skunkworks in June. They worked closely with Trophy Truck builders Geiser Brothers Design & Development. They also drafted the 2018 Baja 1000 overall winner Cameron Steele to help with the creation of the Ford Bronco R Prototype.

As they developed the Prototype, the engineers used a stock powertrain, including the EcoBoost engine, the paddle-shifted automatic, transfer case, and the front differential. Special equipment included the modified Ford T6 BOF chassis, independent suspension that used Fox shocks. Other equipment included a five-link rear unit, rear differential, and race exhaust. Plus, the developers installed a 70-gallon fuel-cell, 17-inch beadlock wheels, 37-inch tires and a top speed limited to 105 mph. Note that the engineers apparently believed they had plenty of suspension travel in the front and rear suspension. The front suspension, using Fox shocks, had 14 inches of travel, while the back had 18 inches.

Aside from the rotten weather the weekend of the Baja 1000, the Ford Bronco Prototype R was fighting the clock. They had a total of five months to get their entry ready. SCG told Trucks.com that it managed to test the Boot for 1,000 miles before the race, while Ford didn’t have the same kind of testing time.

Ultimately, mechanical failures and the weather combined to put an end to the Ford Performance effort. For example, the race experience three straight days of flooding downpours. The rain put four inches of water on the course, which caused the race organizers to postpone by a day. The postponement was only the third time it has happened in 52 years. They used the time to clean up the course and re-route things. Even with the added time, the course was a mud bowl. There was mud everywhere. At least, the mud was an equal opportunity problem. It affected the more than 140 teams equally. The course also was very different than the track that teams had practiced on.

The course turned into a muddy quagmire that played havoc with the Bronco R. The weight of mud and silt, plus damage from rocks, was just too much. The SGC entry picked up 43 gallons of sludge that weighed 519 pounds. The mud didn’t do the Boot much good and it did even less for the Bronco. That entry was the only other vehicle that competed in Class 2 with the Bronco R. It finished next-to-last only 47 seconds ahead of the race cutoff time.

So, what of the future, will the Bronco R team rise to the challenge again? Of course, you know the answer, it is yes. The team promised a return next year with a better effort, better fabrication, and parts that work together.