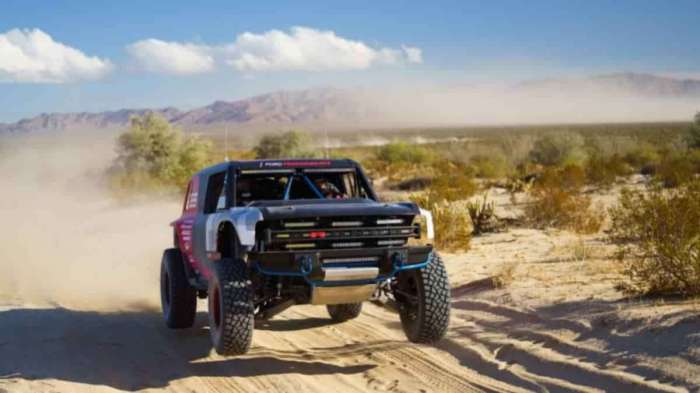 Ford will reportedly introduce the new Bronco to the world when the New York International Auto Show kicks off in a couple of months. The early April debut will be a big day.
Advertisement

For months, the Ford Motor Co. has teased the revived Ford Bronco. It is perhaps the most anticipated vehicle since the sixth-gen Mustang saw the light of day six years ago. Indeed, the anticipation over the new Bronco is running at a fever pitch. The last time the Bronco appeared on the market as a new vehicle was 1996. And, a team from Ford Performance built a special version of the Bronco that did not finish due to a combo of weather and mechanical woes.

One of the results of the anticipation is an increase in speculation about exactly when Ford will premier the SUV. Finally, there seems to be a firm date for the re-introduction of the eagerly awaited SUV.

The Ford Authority, an independent source of information about everything Ford, said this week that the automaker would hold the worldwide premiere of the Bronco at this spring’s New York Auto Show in early April. Right now, Ford is playing with dates but it seems that the carmaker is considering either April 7 or 9 for the announcement.

All Signs Point To NYC Introduction

Is this the correct date? It has all of the earmarks of being the likely date. Why might this be so? The Ford Authority (TFA) pointed to a rather telling teaser that was released by Ford late last year which indicated that the Bronco’s release date would be sometime in the early spring of 2020, about three months away.

Another telltale that the reveal date is probably correct is the fact that Ford’s plans call for the Bronco to debut as a 2021 model. That means it will go on sale in late 2020. If Ford didn’t have plans to sell it as a 2021, then it is quite likely that Ford would just have done another tease without any rumors circulating about when it would firmly go on sale.

A likely challenger to the Jeep Wrangler and the Toyota 4Runner, the Bronco will debut in two styles, a four-door and a two-door. They will, TFA said, likely used body-on-frame construction. Body-on-frame construction is the same type of construction used in Ford’s F-Series pickup trucks. Ford is planning to set up a Bronco sub-brand. The manufacturer plans a Bronco pickup and Bronco Sport “(aka [the] baby Bronco crossover).” Ford plans to debut the third and fourth vehicles in the sub-brand later.

As TFA notes, the return of the Ford Bronco to the lineup in 2021 will put Ford back into the middle of the midsized off-road SUV segment. This segment of dominated by vehicles such as the Jeep Wrangler and the Toyota 4Runner. The manufacturer plans to build the new midsized SUV in its Michigan Assembly Plant. Until 1996, Ford made the earlier Bronco in the same manufacturing plant. According to TFA, intro day in New York will “serve as the big day” for the SUV.