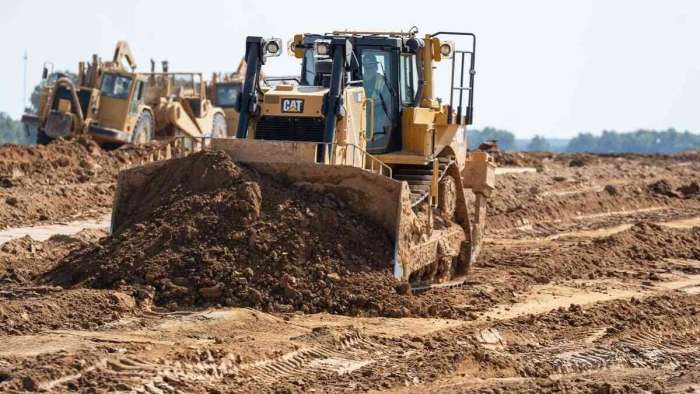 Ford is taking a bold step into its future by breaking ground for its BlueOval City battery plant in Tennessee.
Advertisement

As recently as five years ago, many skeptics listened to the plans from automakers across-the-board and expressed their doubts. The doubts were that the industry would switch quickly from traditional powerplants – internal combustion engines (ICE) – to electrics.

It Was A Jigsaw Of Dates and Promises

At the time, automakers announced plans to go electric by 2025 or 2028, or 2035. It was like a jigsaw puzzle of dates and promises. It sounded to many as if all the announcements made then were to quiet down critics who looked at autos and their emissions and were, to put it mildly, doubtful that the industry would make its targets. Indeed, some skeptics doubted the industry would hit the million vehicle mark as was variously promised. Now, you can see that the industry is heading toward almost total conversion and multimillion electric vehicle production even more quickly than imagined.

Indeed, the auto industry announced a spate of electric vehicles. Automakers like Ford worked hard to introduce different electric vehicles. As recently as 2019, vehicles like Ford’s Mustang Mach-E were still in the announcement stage. However, within a few years – 2021 – the car industry had pushed the accelerator to the firewall. Electric vehicles seemed to roll out faster than anyone had ever expected. Indeed, electrics were rolling out. Indeed, Ford recently opened the order banks for the Mach-E, which I detailed here.

One knew that the industry meant business when Ford announced it would invest big money in electrifying one of its bread-and-butter lines, the F-150 pickup. Rumors and then teasers continued hot and heavy through 2020. There were also many interviews with the leading engineers on the project that showed the Ford effort was real. Ford’s electric truck, of course, is the Lightning. Senior Reporter John Goreham discussed pricing in a story this week where he was surprised by the price of the new Lightning

You also had to know the effort was very much on the front burner when Ford announced it would turn out an electric Transit van, the E-Transit, which hit the market this year.

Electrification In Less Than A Decade

In the space of half-a-decade, Ford went from hybrids to full electrics with a commitment for more. The fact is that Ford is cruising to switch over most of its lineup well before the end of the decade.

Another way to tell that Ford has put its manufacturing weight behind its electric fleet is the new plant at BlueOval City in Tennessee. The plant will be home to Ford’s vehicle battery production. This week the automaker broke ground at BlueOval City, the automaker’s largest production complex in the company’s 119-year history.

Plans call for structural steel to be erected less than one year after Ford and SK On announced their $5.6 billion investment to build a revolutionary all-new electric truck and advanced batteries for future Ford and Lincoln vehicles in West Tennessee. The nearly 6-square-mile mega campus will create approximately 6,000 new jobs when production begins in 2025.

“We are building the future right here in West Tennessee,” said Eric Grubb, Ford’s director of new footprint construction. “This facility is the blueprint for Ford’s future manufacturing facilities and will enable Ford to help lead America’s shift to electric vehicles.”

With construction underway at BlueOval City, Ford – America’s No. 2 electric vehicle brand – gets closer to its target of a 2 million EV production run rate globally by late 2026.

“Ford’s historic investment in West Tennessee is a testament to our state’s strong business climate and unmatched workforce,” said Gov. Bill Lee. “BlueOval City will have a transformational impact on Tennesseans and our economy, and we’re proud this global company will call Haywood County home.”

Ford continues to engage with West Tennessee communities through live-streamed discussions and collaborative projects. Most significantly, the company is working with the University of Tennessee to restore the stream waters flowing through the University’s Lone Oaks Farm and to expand STEM education to Tennessee students from kindergarten through 12th grade.

BlueOval City Construction by the Numbers

Since March, Ford and its construction partners began preparing the land for construction; significant progress has been made.

Tesla Contemplates A New Strategy for China Retail even As Sales Boom
Jay Leno on Elon Musk & EVs: “I Think He Should Get ... Credit"
END_OF_DOCUMENT_TOKEN_TO_BE_REPLACED