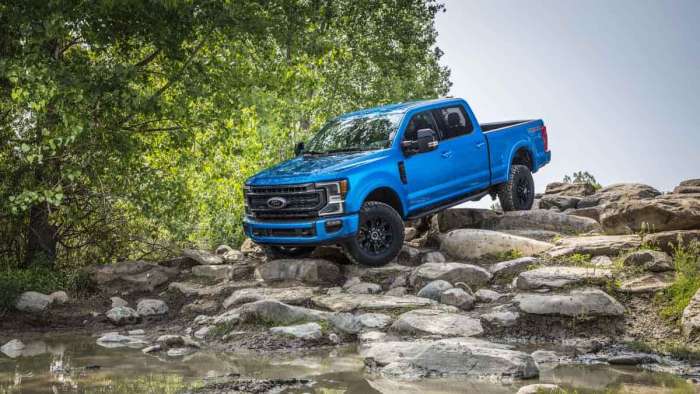 Even though the summer is winding down, you can still head out and get a few more weekends of off-roading or camping or just goofing around. When you get back, though, if you go over to your Ford dealer you may notice something that might not have been there before you left, 2020 models. That’s right, the F150 and F250/350 (Super Duty trucks) have already slipped into the 2020 model year each line with its changes.

For 2020, the Blue Oval continues to offer models that set new standards for the auto industry. A few years ago, for example, Ford came up with a way to fabricate aluminum body panels that made them as safe as steel panels but with a lot less weight. That was in 2015, and Ford continues its innovation across its model line.

For example, for 2020, Ford plans to introduce its first Hybrid F150. According to observers, the F150 Hybrid removes a significant issue from the F150 lineup because it helps to increase the line’s overall mileage figure. The Hybrid, thanks to its battery power, boasts an improvement in mileage. It has been a model that has been eagerly anticipated by many for some time now.

Meantime, the F150 has six engines available. Ford continues its engine lineup that is heavy on turbo-motors. There are two naturally aspirated engines available. For 2020, the naturally aspirated engines are the 3.3-liter V-6 and 5.0-liter V-8. The turbocharged (EcoBoost) engines are the 2.7-liter V-6 and the 3.5-liter V-6. There is also a 3.5-liter twin-turbo V-6 that pumps out 450 horsepower and 510 pounds-feet of torque. Early F150 Hybrid engines are slated to be mild hybrids. There is also Ford’s 3.0-liter Powerstroke Diesel which cranks out 440 pounds-feet of torque.

The F150 lineup includes Ford’s factory-offered pickup that you can easily use for off-road racing, the Raptor. The Raptor uses the EcoBoost Twin-Turbo 3.5-liter engine for power. The Twin-Turbo turns out tons of power and torque. The Raptor also features a long-travel front suspension, extra-large wheels, and tires, and other features make this just right for off-road excursions.

For 2020, the big news is the return of the Tremor nameplate to the Ford lineup. Ford last used the name in its F150 lineup in the 2014 model year. With 2020, the name has returned to the Ford lineup, albeit in the three-quarter-ton space. It makes the F250 an off-road heavyweight.

Unlike the Raptor option, which admittedly is an F150 performance offering, the Tremor option adds real off-roading features to the F250 lineup. It is an option package aimed at people who go off-road and who must negotiate rocks that appear in the wrong places, streams that appear in similar spots, as well as any other things that off-roading can toss at you. You might think that this type of option is overkill to the average F250 owner, but it isn’t. A recent Motor Trend article, quoting Ford executives, says that at least 15 percent of all Super Duty (F250/350) owners accessorize their trucks. The first thing to go are the factory wheels and tires. Within six months of taking delivery of their F250s, owners are putting on new sets of customized wheels and tires. Next, on the agenda, owners usually buy lift and suspension kits to kick their F250s up a notch and make them real off-roaders.

The Tremor package does away with the need for the upgrades; Ford has decided to offer owners the most popular upgrades as a package. The Tremor slots in above the FX4 option. Motor Trend said that while the FX4 is more about looks than it is about any updates though there is a bit. The Tremor package goes a lot further down this track with some heavy-duty changes. Ford believes this will be a popular offering. The automaker expects that half of its future Super Duty buyers will opt for either the Tremor or FX4 packages.

Watch for news about the 2020 Ford F150 and F250/350 SuperDuty trucks and their changes for 2020. Click To Subscribe To Torque News Youtube Channel For Daily Ford and Automotive Industry News Analysis.

When Tremor buyers opt for the optional package they will buy an F250 that has had its suspension upgraded; its shocks updated; bigger wheels and tires, plus more off-road tech. The Tremor name appears on the sides of the pickup bed and the shocks. It doesn’t appear on the interior. Ford execs hope that the Tremor name will have the same type of name-recognition as the Raptor has with F150 owners.

The package is available only on single-rear-wheel SuperCrew trucks, equipped with 6.75-foot boxes. It is the type of heavy-duty pickup that Ford believes is most conducive to off-roading. You have to add the high-capacity trailering option to your F250 to order the Tremor package. It is also available only for four-wheel-drive models. The Tremor option is available on the XLT option and up. It is not available on the base XL, which the automaker considers to be a fleet or work option. The other pricing points are the Lariat, King Ranch, Platinum, and Limited.

Ultimately, the Tremor option will square off against another rock-crawling model from Ram, the Ram Power Wagon which can hurtle most off-road situations. GMC will also likely offer an off-road capable version of its Sierra HD, Motor Trend observed.

The F250 is a truck that lends itself to customization. There is any number of tire/wheel combinations; front suspension options; lift kits, and more available that will individualize your F250 or your Ram 1500 more completely. If you want a chance to upgrade your F250 or Ram 1500, you can take advantage of American Trucks’ Redrock 4X4 $5,000 Giveaway. American Truck Gives You Chance To Upgrade Your Ram 1500. For more information, contact American Trucks at 888-706-1096.

Imagine being given a chance to spend $5,000 on upgrading your Ford F250. Why, you might be able to take the Tremor package to the next level with even better wheels and tires. American Trucks has extended the giveaway to Ford's Super Duty Series. Here is more information on the American Truck Red Rock Giveaway.

Marc Stern wrote on August 22, 2019 - 9:07pm Permalink
If you have a comment about Ford's 2020 lineup or would like to offer a different opinion, please feel free to comment.