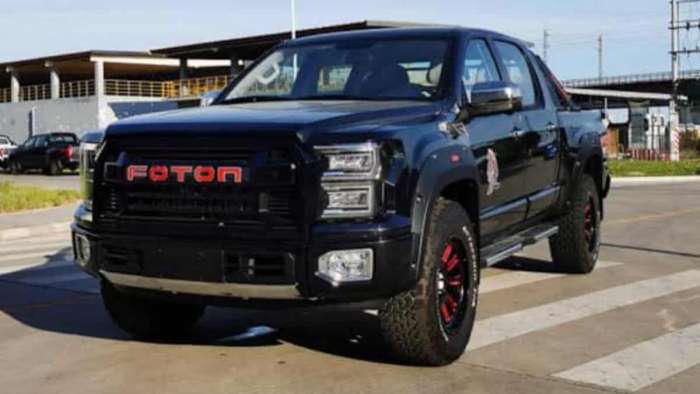 If there's one thing you can be sure of it is that you will find ripoffs in China. The latest blatant theft from Ford is based on the automaker's F-150 Raptor. Instead, its Chinese builder has tried to hide it behind the name Da Jiang Jun. It seems exotic but it's not. It stands for "The Big General." However, we think you might find it about a second lieutenant, at best.
Advertisement

If you have followed the Chinese economy at all, you've probably heard or read about the knock-offs that have dotted the country's economic landscape for years.

About five years ago, for example, one Chinese automaker unashamedly took a look at the Land Rover Evoque and then came out with its version of the same vehicle. Or what it believed to be the same vehicle. At the same time, Torque News can't be sure why the company that created the Rover knock-off never got it quite right.

Calling it the Land Wind X7, it appeared in 2015. At the time, Jaguar Land Rover was also in a big push to sell more of its vehicles in China. They were doing it the way China wanted. The company was investing almost $2 billion in a new factory there to make real models, not knock-offs. Jaguar Land Rover took the knock-off maker Jiangling Motors to court, and in 2019, Jag won. The victory was huge as it was one of the first times China ruled against one of its own.

The court found that Jiangling had copied five features from the Evoque, and it had violated Jaguar's intellectual property.

The Land Wind was hardly an Evoque. Though it looked like one on the outside, it was not. For example, as for performance, you might have just as well cut a couple of holes in the floor and pushed with your feet. The performance was anemic, all around. The brakes were weak, the transmission was flat, and the front-drive performance was weak.

As they say in the movie business, it was all just a pretty face. Yes, it still looked like the Evoque, but it wasn't. And, now, if you want a knock-off Ford Raptor, the land of the not-so-rising knock-off gives you the Foton Da Jiang Jun, "The Big General."

Before we go further in looking at Foton's Da Jiang Jun, let's take a look at a for-sure-real, upcoming Raptor, the 2023 Bronco Raptor. Ford has plans for a Bronco Raptor. Indeed, it was announced the other day by Ford that there will be a 2023 version of the Bronco Raptor in the U.S.

According to The Ford Authority (TFA), an independent source of information on Ford products and trends, though "The Big General" appeared earlier this year, it is nothing but a colossal ripoff of Ford's F-150 Raptor. It was the first move in the copying of Ford's 2021 F-150 Raptor. And, now Foton is readying its "Big General" for a significant appearance in this month's Beijing Auto Show later this month.

And, while the "Big General" looks for all the world like Ford's F-150 Raptor, the automaker should rest assured that it isn't. Take the powerplant, for example. Right now, if you were to pop the hood to look, you won't find a version of Ford's EcoBoost 3.5-liter V-6. Instead, you'll find a very anemic turbocharged 2.0-liter that turns out only 238-horsepower. The engine could easily be a 2.0-liter or a 2.5-liter diesel, TFA notes. There are no specs out yet.

The transmission isn't close to the Ford 10-speed automatic. Instead, "The Big General" gets a captain' s-sized eight-speed ZF manual. It is quite a choice, says TFA.

TFA notes – and we agree – "that perhaps the folks designing these vehicles should come up with something different, yet similar."

Speaking of further coverage of vehicles like "The Big General," as soon as Torque News has more information on Futon's Raptor knock-off later this month, we will publish it. One thing we will speculate on here is that since this vehicle is smaller than the Ford F-150 Raptor, perhaps they were shooting for a more Ranger Raptor style version.

Torque News also would like to note that foreign automakers like Ford – and Jaguar Land Rover – do defend their models quite vigorously in court. So, we expect there will be what could be the Chinese version of an injunction against the General later this month. Whether the courts will agree with Ford or not remains in the future.