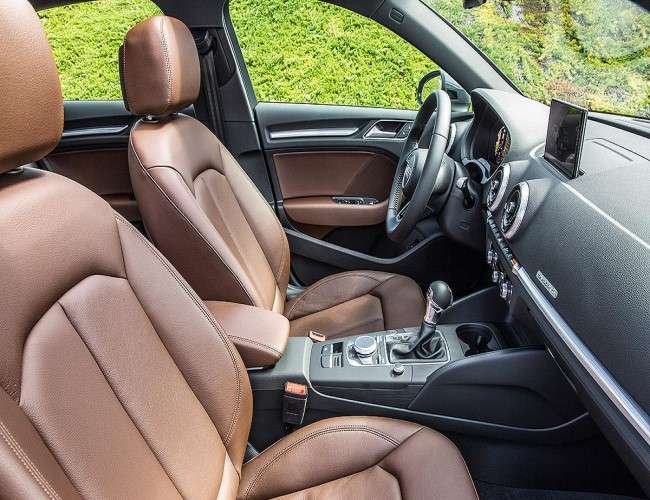 Two vehicles from the Volkswagen Group led this year's J.D. Power Seat Study. Based on the responses of more than 77,000 new car and truck owners, Audi's A-3 led in cars with no problems reported; Porsche's Cayenne led the SUV category with 0.8 problems per 100 vehicles.
Advertisement

It never ceases to amaze that nearly every day there seems to be a new award or study or something else that praises or honors cars in one way or another. The latest is, wait for it, seats. Granted, seats are critical. You can’t drive a vehicle without sitting in a safe, supportive seat. And, for that matter, you can’t ride for any appreciable distance, unless you are cargo, without a seat.Audi A3 leads in 2017 seat study.

Since seats are so necessary to cars, it makes sense that an outfit like that the well-known firm J.D. Power, whose studies cover everything from, it seems, carpeting to buyer attitudes, would offer an analysis of seats, as it looked for the perfect seat.

No Problems Were Reported With Seats

For 2017, the seats in the Audi A3 received an excellent rating in the latest Seat Quality and Satisfaction Study. Magna International supplied Audi’s seats. Their quality shows how seats have steadily improved. The study reported 0 problems per 100 cars sold with those seats installed.

Brent Gruber, senior director of global automotive at Power, told Automotive News that it is the direction in which things are headed. “When we go back the last four years, we see a trend going upwards with satisfaction. He said Power thinks the trend will continue.

With a history of more than four decades studying consumer habits and tastes, Power has become a leading industry source of consumer information on cars. Its reports on customer gripes show there are still problems with seats. This year, some of the more common problems include blue dye transfer, cracking and peeling leather or vinyl and squeaks and rattles.

Interestingly, another part of the Volkswagen Group, Porsche, has a vehicle whose seats are number two, the Porsche Cayenne. Supplied by Adient, consumers reported 0.8 problems per 100 vehicles.

In this year’s study, eight suppliers provided the 23 highest-quality seats in seven vehicle segments. Power divided the segments into:

Lear Was Leader In Vehicle Seats

According to Power, Lear placed five vehicles in the top 23 seats. Following Lear were Adient, Toyota Boshoku Corp., and TS Tech Co. each of which had four apiece. Magna had three vehicles and Delta Kogyo Co., Tachi-S Co. and Avanzar Interior Technologies provided one apiece.

More than 77,000 new car and light truck owners provided the information used for this study.

LG's New EV Battery Plant Is a Welcome News for Tesla
Tesla Giga Berlin's New Hurdle: It's Not Only the Gov't, but Now Tesla Itself
END_OF_DOCUMENT_TOKEN_TO_BE_REPLACED