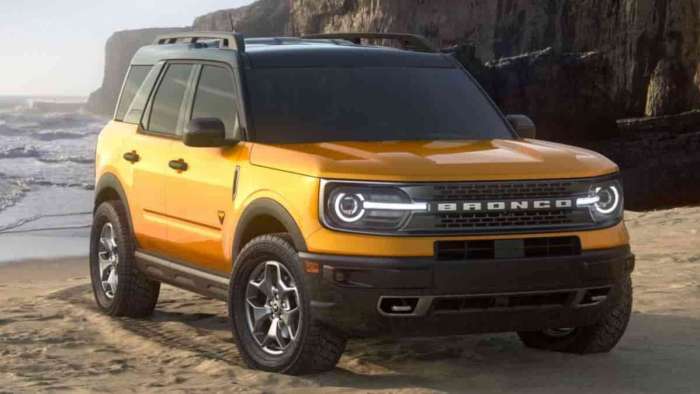 Ford has announced a wide range of price increases for its 2022 Ford Bronco Sport. The bump ranges from $50 for a basic Bronco Sport to much more for the top-end Badlands trim.
Advertisement

A couple of years ago, when the Bronco brand and its offerings first appeared from Ford, one of the givens was that the full-sized, two-door, and four-door SUV versions would be the pricier – and somewhat more exotic – versions of the line. The mid-sized Bronco Sport was to be the lower-cost option.

Bronco Has Been Beneficial To Ford

Ford has benefitted from the Bronco. From the time the order banks were opened, many buyers have stepped up. Customers have placed their orders with many waiting months until the first Broncos appeared.

Ford has top September as sales soar for some lines.

Indeed, customers were willing to wait patiently until the Bronco Sports that they had ordered appeared. In fits and starts, they began to ship from the factory to their customers. Indeed, Bronco customers have been among the most patient car customers on the planet recently because their vehicles were delayed again and again by the semiconductor shortage. The shortage has plagued the auto industry since it tried to kick back into high gear last year following shutdowns brought on by the coronavirus. 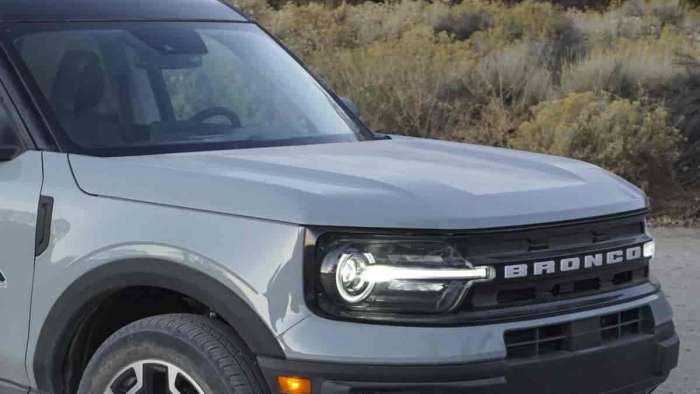 However, Bronco Sports have been rolled out of the factory and have made their way to customer driveways.

They continue to appear and are expected to appear in more significant numbers in 2022, provided the semiconductor shortage eases.

Ford Bronco Sport proves it is not a small SUV in this excellent analysis by Senior Report John Goreham.
Low End Broncos Up A Bit

It isn't a huge hit but, nonetheless, prices for 2022 Bronco Sports are up. And, even as they appear in 2022, their price has gone up by a bit. Cars Direct reported the price blip, and the automaker confirmed the price increase.

Citing market conditions, Ford told the Roadshow (quoted on Microsoft Auto News) that there would be a tiny price increase – roughly $50 – so that 2022 Bronco Sport models will show manufacturers retail price of $28,760. However, Bronco Sports have already shown a price increase of $540 during the summer. The $50 price hike is, of course, on the low end, basic trim. 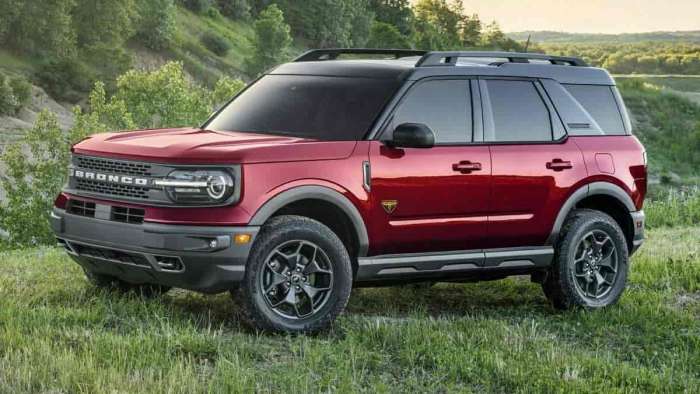 So, while the Sport is currently showing a token price rise, if you look closely at what has occurred to the Bronco Sport mode's pricing since last spring, the price, depending on trim, may have risen $1,115, compared to a 2021 vehicle. Indeed, the price increase has been much more substantial at the top end of the trim spectrum.

The Roadshow went on to discuss the top trim level of the Bronco Sport, the Badlands trim. A Bronco Sport Badlands edition costs $36,925 for 2022. Looking closely at what is built into the new price level, you will find a $575 price hike (2021) plus another $540 bump. This trim is the one showing the most significant increase.

Though you should be able to find the Bronco Sport in the trim level you want, you may find that dealers – to be truthful – may add a bit to the final price here and there. This is because the inventory for Bronco Sport is tight as ever due to the ongoing semiconductor shortage. Indeed, if you can find a 2021 Bronco Sport, says the Roadshow, it could quickly turn out to be the best deal.

The Ford Bronco Sport's inventory is tight because of the chip shortage that is impacting the auto industry.

LG's New EV Battery Plant Is a Welcome News for Tesla
Tesla Giga Berlin's New Hurdle: It's Not Only the Gov't, but Now Tesla Itself
END_OF_DOCUMENT_TOKEN_TO_BE_REPLACED