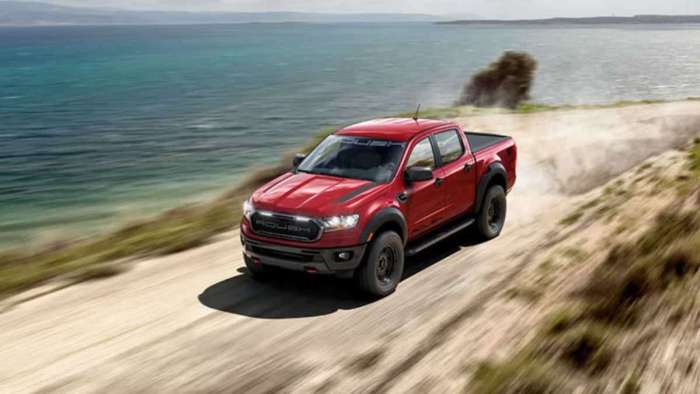 2020 Roush Brings Style, Capability To What Could Easily Be Ranger Raptor Outline

The Roush version of the Ford Ranger took some time to develop but now that it is here the tuner is excited by its prospects.
Advertisement

It’s getting closer. What is it? It’s quite simple, Ford’s Ranger Raptor, the one that has been on sale for the last couple of years in Europe, but isn’t on sale here. In fact, according to various Ford sources, the Ranger Raptor is a single model year away (2022), and it will feature many changes.

That said, there is a special version of the Ranger available now that could easily be the outline for an American Ranger Raptor. Roush Performance has done some fundamental changes under the skin and has tuned the Ranger into a special Roush vehicle.

Let me take this paragraph to tell you that the vehicle I am talking about – the Roush Ranger – is very Raptor-like, but it is not – and I repeat not – a Raptor. For that will make you wait another two years (one model year) for the real product. That’s when Ford plans to bring the Ranger Raptor to the American market.

Plans call for significant changes to the Ranger in 2022 and the addition of an American Raptor, at that time, powered by an updated 2.7-liter V-6 twin-turbo that kicks out 325 horsepower and 400-pounds-feet of torque.

Currently, the Roush Ranger is powered by Ford’s standard 2.3-liter EcoBoost powerplant. The engine cranks out 270 horsepower and 310-pounds-feet of torque. Roush uses the Lariat SuperCrew 4X4 trim level as the base version of their Ranger. The Roush Ranger carries a price premium of $12,750 over the manufacturer’s suggested retail, so the Roush Ranger has a price of $51,425.

So what have we here? According to Roush, the Ranger combines both off-road prowess and rugged looks to create the ultimate midsized pickup. It features the signature Roush grille with dual LED light bars, and Magnetic Grey painted fender flares with integrated accent lighting.

Both the flares with their lighting and the dual LED light bars make the Roush Ranger stand out wherever it goes. The Ranger also features custom fender vent badging and Roush puddle lamps that give the Ranger its style.

Aside from the noticeable external changes, most of the good stuff is underneath. For example, the Roush equips the Ranger with a Roush/Fox 2.0 performance suspension system. The suspension system features General 32-inch Grabber ATX tires on custom 18-inch satin black Roush wheels. This means it can handle any terrain you are thinking of taking on.

The Roush Ranger features a suspension has been lifted about 1.5 inches or so to level the stance of the truck. In turn, this improves the on-road performance of off-road capability. Meantime, a dual-tip performance cat-back exhaust system delivers an aggressive exhaust note. The tips are stainless steel.

Roush Ranger Features Options
The Roush Ranger features a number of options that allow you to really customize your trucks. For example, you can add the optional Roush Chase Rack, which features dual rigid 10-inch light bars for a Baja-inspired look. The rack sits above the bed without sacrificing cargo space and features 7,290-lumen light bars. They feature translucent black enamel lights and an integrated thermal management system to extend the longevity of the LEDs.

There is also an optional retractable aluminum bed cover that opens or closes in seconds. There is no drilling required, just the twist of a knob and the cover retracts, securing cargo from unwanted viewing.

When the optional bed cover is selected, drivers can pick a cargo management system that automatically holds the cargo in place as you drive.

Other additional options include the Roush off0road utility kid, a Roush center console vault, and a rear seat vault for additional secure storage under the rear bench.