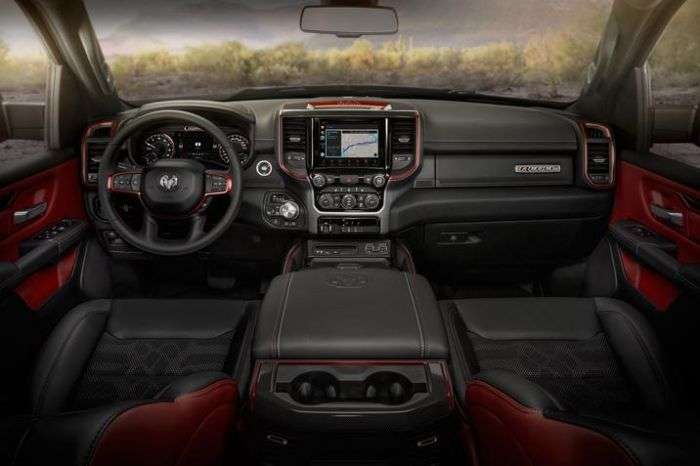 Why Prospective Buyers want more options on the 2019 Ram Rebel

The 2019 Ram Rebel has a very aggressive exterior but some Ram enthusiasts say they don't like the interior on the new truck.
Advertisement

People are just getting the chance to see the 2019 Ram 1500 Rebel as the prototypes are making the rounds of auto shows and specialty events. Some diehard Ram Rebel lovers aren’t impressed with the new truck’s interior. Buyers say they are tending toward other trim levels to get what they want.
Dare asks members of a popular truck forum for their opinions about the new 2019 Ram Rebel. “With the new Ram I am really liking the more aggressive look of the rebel, it also still shares the grill styling idea from the last gen Rebel which keeps a little relation. But I do wish it had more interior color options as I'm not really a fan of the red interior. The Laramie and limited have great interiors and the color combos look great. But the front of the truck has lost that aggressiveness that the previous gen had. I don' want to say it's bland on the front but it definitely seems more generic now. It would be nice to see the rebel introduce more interior color options. My reason for posting was to see if others felt that same way in regards to this new truck.”

RSR hasn’t seen it in person yet, but he seems to agree. “The Rebel exterior is badass. I bet it is unbelievable in person. I do agree though. The lack of interior options and also tech features will keep me from buying it. I've never been a fan of the tire tread seats and all that red plastic just isn't working for me. The 4x4 off road package and Mopar accessories can get a Laramie close enough so I think that is what I'll be doing.”

Another owner posted, “I feel the same way. It's almost as if they don't care that much about the Rebel. The options list isn't there.”

Sport has already seen it in person. “I sat in the 2019 rebel at the Chicago Autoshow and I loved the feel of the new cabin, the leather feels a step above from the current Rebel, also the integration of the 8.4" screen with the switches underneath felt better than the larger 12" screen in my opinion.”

MHB is surprised about Sport’s impression. “Care to explain? The 8.4 has been around for years, It’s dated and old. The new 12in to me is just straight bad ass. So much screen to see. Plus Android auto. To me the dated 8.4 needs life added, Needs a refresh at least to compete. But the red interior is not working for me. They should at least offer a black seats option.”

Sport explains why he likes the smaller screen better. “To me the 8.4 felt crisper and faster than compared to my parents current Grand Cherokee Uconnect. For some reason the 12" felt too large for easy use. The layout of the switches felt somewhat more centralized to myself. The other thing is both the stock sound system in the Rebel and the upgraded Harmon Kardon system are ages ahead of the 4th gen, they blew every other truck system on the market away.”

Blotter also disliked the new interior enough to switch trim models. “I was going to order a Rebel, but hated the interior. But Laramie + Off Road Group pretty much = Rebel capability. Then you can just buy a different grill. I personally don't like the Rebel grill as much, but that's just me. I'm having the mopar 2" lift and 35" tires put on before I even pick it up new. Not sure what the rebel has that mine doesn't now, beside approach and departure angles, but I'll be swapping those bumpers out when the aftermarket comes out with something good.”

Dare believes that the interior of the 2019 Ram Rebel may cost the company some of its sales. “If ram would have offered a black interior with the level 2 interior package group as an option, they would have a lot of buyers for that rebel that aren't going to purchase it as is now.”

It will be interesting to see if the 2019 Ram Rebel sells as well as previous years. Typically, truck enthusiasts love the more aggressive package. If Ram later adds a different, perhaps plain black interior, it will be a direct response to consumer’s complaints.

vbondjr wrote on March 13, 2018 - 10:36pm Permalink
the only thing the Ram Rebel needs now is a 485hp 6.4L V8 and a 10-speed auto. That's it!
Travis Eby wrote on May 27, 2018 - 7:34pm Permalink
Absolutely agree concerning the red interior. While I understand having red as an option,there needs to be more options for buyers on this particular Rebel. I like the option of black,my choice personally. But, I would probably buy this rebel if black interior was in it across the board,like a midnight edition,or something along the lines.Other editions have this interior options, why not the rebel? I think it necessary to bring this rebel up to speed with other trim levels. Let's not forget about the rebel, RAM!
Jeff Suveg wrote on May 29, 2018 - 11:26am Permalink
If Ram only wanted to offer one interior color with the Rebel it should have went with black. I couldn't look at the red everyday.
KENNETH SKAHAN wrote on June 7, 2018 - 10:39am Permalink
Yep, the tire tread and red combo sucked before, and it still does. Black leather and I would buy it.
Allan L. Rubin wrote on July 9, 2018 - 4:46pm Permalink
I agree about the interior, I'd also like to add that there was a really sharp blue exterior paint a year or two ago, now, colors are VERY limited. I agree with whoever said Ram doesn't seem to care about the Rebel, treating it as an afterthought.
Kelly wrote on July 22, 2018 - 3:27am Permalink
It would of been smart if Ram had more options on the interior but I like my 2019 rebel with the v8 e-torque it drives great and the interior isn’t bright red and it’s on the edges and back of front seats and door panels .I get a bunch of people come up and say they love the look .
Joseph wrote on August 7, 2018 - 9:19pm Permalink
Ram trucks have great exterior looks but I have never been able to build the one I would like because they often only offer one interior color which is usually black. Once again on the 2019 if you want a truck with sport appearance your stuck. Prefer no chrome on the exterior with lighter interior colors. They lost me as a customer because of this change (made years ago). They did the same with Jeep and Chrysler. Would love a white Laramie Sport with a light frost beige interior.