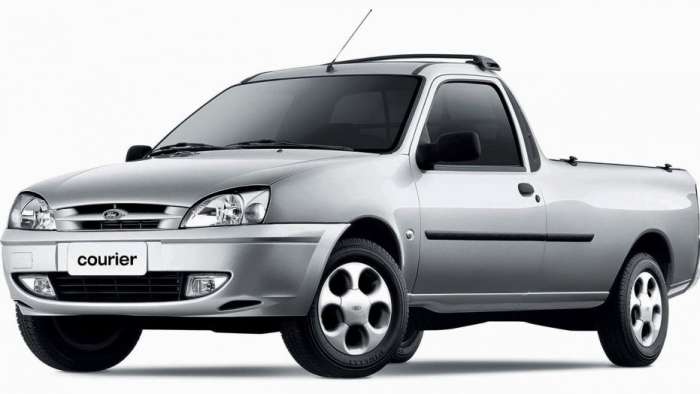 Why Ford May be Considering a Compact Pickup Truck

Apparently Ford is considering building a compact, small pickup truck, based on the Ford Courier that used to be built in Brazil. Seeing as the world seems to have gone truck crazy, Ford's timing could be great!
Advertisement

Ford is reportedly considering producing a tiny version of its popular F150 based on a vehicle the company used to market out of Brazil. The little pickup used to be called the Ford Courier but some are suggesting that a new, tiny truck could be called the Ranchero.

The Ford Ranchero harkens back to a half truck-half car vehicle that competed against the Chevrolet El Camino. Nothing like that vehicle exists in the U.S., today, but the timing could be right to bring it back.

Ford has said that it is moving away from sedans, in favor of crossovers and trucks that are popular with drivers currently. Some consider the move an admission that the company is facing deep financial concerns and concentrating on the truck market is a short term answer, to fund its overdue push into electrified and autonomous vehicles.

The Ford Courier was a small truck that Ford built in Brazil and exported. It was based on the old model of the Ford Fiesta. It was built from 1998-2013 and sold in Europe and Mexico. In Europe, it often was featured with a cap on the back and resembled the Ford Transit Connect.

The new pickup could easily be based on the redesigned Focus that Ford is intending for other markets but has tabled for the U.S., while its concentrates on trucks. Ford is already planning a crossover vehicle based on the Focus that is supposed to be smaller than the popular Ford Escape and larger than the tiny Ford EcoSport. The Focus-based crossover could hit showrooms as early as 2020. No word yet on a name for the sub-compact SUV.

Ford already has the new midsize Ranger pickup heading to dealers early next year. The new compact pickup could be designed and produced as early as 2022.

Could the Tiny Truck Create a New Market?

The North American market has shown an incredible thirst for trucks and crossovers/SUVs. The tiny, more affordable truck could help draw younger consumers into the truck market and build brand loyalty for the larger midsize and full-size pickups.

There is also a trend for the baby boomers to downsize to smaller vehicles, while still demanding all of the convenience and amenities of their full-sized vehicles. That has led to the popularity of the smaller crossovers like the Ford Escape and Lincoln MKC. Buick has had tremendous success with the smaller SUVs like the Encore, and Envision. Subaru has its compact CrossTrek.

Perhaps the Ford tiny truck could start a similar trend. Hyundai is supposedly also working on a little truck. According to Automobile magazine, which originally broke the story, Ford isn’t commenting on the possibility. Once the new vehicles do hit showrooms, you will be able to compare their fuel economy and safety ratings here.

Cromer wrote on August 19, 2018 - 10:49pm Permalink
About time for the Ford to introduce this kind of truck for the US customers, especially on the lower states.

LG's New EV Battery Plant Is a Welcome News for Tesla
Tesla Giga Berlin's New Hurdle: It's Not Only the Gov't, but Now Tesla Itself
END_OF_DOCUMENT_TOKEN_TO_BE_REPLACED