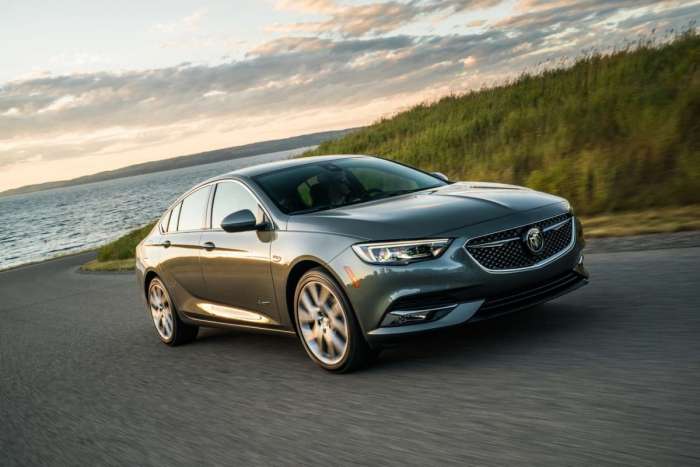 Why Buick is giving the 2019 Regal the Luxury Avenir Treatment

While other auto companies may be eliminating most of their sedans, Buick is giving one of their new 4-door sedans the luxury treatment. Buick has made an important discovery.
Advertisement

Buick is taking the wraps off its latest sedan and giving the 2019 Buick Regal the upgraded Avenir trim package. Buick has determined that its customers like luxury and that they are willing to pay the price for the luxury trim level.

Buick is Finding that Buyers Want Luxury Inside and Out

According to Buick, the Enclave Avenir is the fastest selling trim level for its popular SUV. Buick says that since the Avenir package was introduced last year, Enclave Avenirs makes up 20 percent of total Enclave sales. The automaker says the LaCrosse Avenir is selling 70 percent faster than its other trim levels. Buick is hoping that the Avenir label will have a similar effect for the 2019 Buick Regal Avenir.

The 2019 Buick Regal Avenir will be the fourth Buick to get the luxury Avenir treatment.

Phil Brook, the vice president of Buick and GMC marketing, says in a statement, “Avenir sales have exceeded our expectations. Buick customers value the exclusive styling, premium features and convenient experience Avenir provides, and we are excited to extend that successful formula to Regal.”

Buick says that their numbers show that half of all Regal Sportback buyers are choosing the top trim level available and that the demand for luxury is growing. Even though Ford and Fiat Chrysler appear to be abandoning the midsize sedan market right now, in favor of building more trucks and crossovers, Buick claims that demand for midsize cars in the $30,000 to $40,000 range is up 30 percent.

Buick is planning to debut new technology as part of the 2019 Regal Avenir package. The 2019 Buick Regal Avenir will feature the first cloud-connected Infotainment System. Customers will be able to have embedded apps and be better able to access vehicle features such as profiles, available navigation, voice recognition system updates and applications. Owners will be able to personalize their user preferences and seamlessly take that profile with them into any compatible vehicle.

“Innovation comes standard with Avenir. It is a place for us to showcase our latest ideas to promote occupant well-being before we roll them out to other vehicles in our portfolio. The Enclave Avenir was the first Buick with Evonik Acrylite exterior lighting, a Rear Camera Mirror and an ionizer, and now Buick’s latest infotainment interface will come standard with the Regal Avenir.”

The 2019 Buick Regal Avenir will also have upgraded interiors, featuring diamond-quilted front seats and a beige interior with ebony accents. The car’s exterior will sport the Avenir mesh grille and special badging.

The 2019 Buick Regal Avenir will have a 250-horsepower 2.0-liter turbocharged four-cylinder engine.

The 2019 Buick Regal Avenir’s price and fuel economy will be released this fall, closer to when it is due to arrive in dealer showrooms.

Buick has found that luxury sells and despite the downturn in the sedan market, the company is hoping that sedans loaded with luxury sell faster.