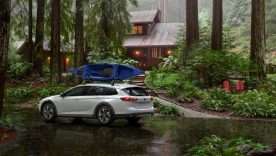 2018 Buick Regal brings back a wagon

Buick is introducing two new models, a sportback and a wagon. This isn't your grandfather's Roadmaster! It is a sporty take on the wagon for people who love the room of a SUV and the functionality of a car.
Advertisement

Buick is introducing two all new Regals for 2018. The 2018 Regal TourX is the automaker’s new take on the station wagon. Buick claims that the TourX has the cargo space that many people want, packaged in a sportier Regal.

Buick is downplaying the TourX appearance of a station wagon, instead calling it a crossover. Duncan Aldred, vice president of Buick and GMC, says in a statement, “Regal TourX is a crossover in the truest sense of the word, with the drive dynamics of a car and the versatility of an SUV.”

In its press release, Buick compares the 2018 Regal TourX to potential competitors saying, “It has more overall cargo space than the Volvo V60 Cross Country, the Audi A4 Allroad, BMW 3-series Sport Wagon and the Subaru Outback, with up to 73.5 cubic feet behind the front seats.”

The Buick Regal TourX will also feature a hands-free liftgate. The AWD TourX is powered by a 2.0-liter turbocharged four-cylinder engine which kicks out 250 hp and 295 lb-ft of torque.

The other new 2018 Buick Regal is the Sportback. The sportier looking Regal is aimed at a younger audience in the premium sedan segment. The sloping back roofline gives the sedan more room for cargo and the popular five-door layout available in other vehicles in the segment. According to Buick, the new layout gives the Sportback 31.5 cubic feet of cargo space, more than twice as much as the 2017 Regal.

Aldred says, “The new Regal Sportback was developed with today’s active, independent, premium car customer in mind,” They have an SUV in the garage and are looking to complement it with a sport sedan, but have an appreciation for the usefulness of a versatile cargo space when an occasional need arises.”

Buick hopes to use the Sportback to compete with models like the Audi A5 Sportback and BMW 4-series Gran Coupe. The 2018 Buick Regal Sportback is also powered by the same turbo-charged four-cylinder engine.

Buick isn’t releasing pricing yet for either the TourX or the Regal Sportback. Both should be released in late 2017. Much like the popular Enclave and Encore models, Buick is hoping to attract younger drivers who want to compete in the luxury market.