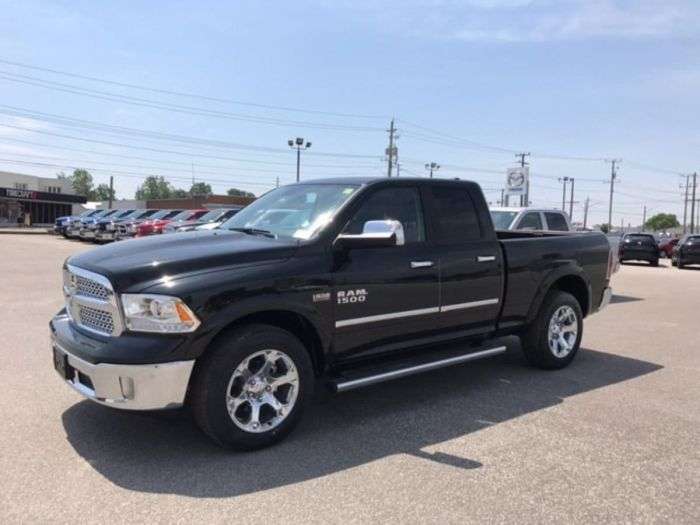 The owner of a new 2017 Ram 1500 is wondering what he should do about faulty pin striping on his truck with only 5000 miles on it. He is concerned that removing the stripes could ruin the paint.
Advertisement

Addison, from Michigan, is perplexed about what to do about shoddy pin striping on his 2017 Ram 1500. Addison asks a popular Ram forum, “I noticed today that it looks like some of my factory pin striping is peeling off. I am not sure when it happened (could have been at the touchless, automatic, or quarter wash, or anytime in between). Truck has 5k miles on it. What would you recommend doing? Would the dealer even consider fixing this?”

Rod says that it is a matter of personal preference. “If you like your stripes I'd show it to the dealer and get their response. Otherwise, I would delete them.”

More Worried About the Paint than the Pin Stripe

Addison is worried about damaging the finish on the truck. “Im not partial to the pin stripes; more so to the time it takes to remove them. Any good recommendations for removal? I don’t want to damage the paint. I read a lot about the 3M stripe off wheel; just want to be careful.”

Scott, from Florida, says it is a dealer problem, regardless of what Addison decides to do. “Tell the dealer to remove them and buff it out. 5K miles, that is ridiculous.”

Not Happy with Dealership Initial Response

Addison appears to be caught in the twilight zone between sales and service. “Just spoke with the sales department. Also described to them that the swirl marks on the clear coat is not acceptable either. Service manager stated that pin striping is not a service department’s responsibility; that striping and prepping (buffing, cleaning etc, from the swirl marks) is actually a sales issue. I’ll wait for a call back from the sales manager and see what they say.”

BTD, from Texas, says that he tries to avoid being caught in the dealership blame game. “From my experience sales and service do not work together ever. You can tell sales one thing and it’ll never get to service and vice versa. Especially with warranty work like this. Whenever I have an issue or need something fixed I just email a sales manager and CC a service manager and basically tell them to figure out whose responsibility it is and then let me know. I hate having to do the work for them by chasing down so and so and then that’s not the right person so go to so and so and so on. If that doesn’t work I just call the dealership owner on his cell and boy does that get the ball rolling...haha.” Which is why the dealership owner never gives out his cell phone number.

Addison is trying to be patient. “Good suggestions! I’ll give them the chance to call back before escalating. I definitely understand the frustration behind "passing the bucket". Hopefully they don’t come back and say it’s not covered. The truck was a dealer trade; the previous dealer put the pin striping on. I asked my dealer if they would remove it and they said no. Guess we will see what they say now.”

Goat says that pin striping usually isn’t even done by the dealership. “The selling dealer has a guy come thru and add them. Just call a dealer and see who the company is and I'm quite sure he will fix the stripes for free or at a very minimal cost.”

Broom says that Addison should check with the dealer and just see where they stand. “I’d take it to the dealer just to find out if it’s a warranty item or if you’re up a creek.”

Jay, from Texas, suggests avoiding the dealership entirely. “Contact someone that installs pin stripes for dealerships and other people. They can either remove the stripes or maybe replace the stripes on the front fenders to match what you have now. It will probably be under $50. It would be worth that to me just not to have to deal with the dealership. The swirls in the paint, either you can remove them or have a professional detailer do it. Never let a dealership try to do paint correction---in most cases it will just get worse.”

Addison plans to check with the dealer. “They want me to come by this afternoon to assess the pin striping... figure I will see what they say before reaching out elsewhere. If worse comes to worse, I can remove them myself with a heat gun and eraser wheel; it’s just the time to do it.
I find it funny that prior to signing to paperwork I asked if they could remove the decals and they said no; now all of the sudden they have a pin striper?”

Withing says that it isn’t that tough to remove the stripes, if it comes to that. “If you want the stripes gone ... I use goof off to take off dealer decals and stripes. Just make sure to wash any residue off as it could eat through your clear coat if it sits for a long while. You could try goo gone or wd40 as well as they are less harmful to the clear.”

In the end, Addison is very pleased with the dealer’s response. “Dropped the truck off yesterday morning; received back 2 hrs later. Dealer took off the pin stripes and wheeled out the swirls. They said they couldn’t get all the swirl marks out, but it looks much better. Good enough that I can wait to deal with them when it warms up! BTW I think it looks much better without the stripes.”

One of the great things about these forums is that most of the members truly try to be helpful. Jay went out of his way to invite Addison to another section of the forum about detailing and said that members will help them get rid of the swirls in the paint finish.