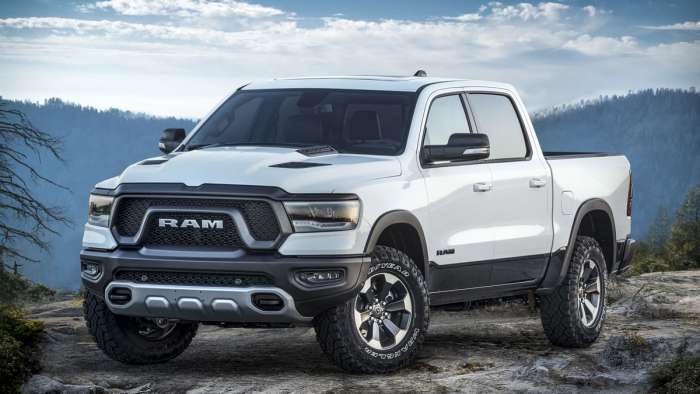 Ram sales topped Chevy Silverado sales for the third quarter and it is a strong sign that Ram may beat Chevy in sales for the year. We look at three reasons why.
Advertisement

Ask anyone, Ram pickups are on a roll. The 2019 Ram 1500 is the most awarded pickup in history, winning awards for its luxurious interiors, upgraded styling and improved handling. Third quarter sales have been released and the 2019 Ram beat the 2019 Chevrolet Silverado for third quarter sales. So far this year, Ram has sold 461,115 Rams compared to the 409,316 Chevrolet Silverados sold during the same period.

There are three reasons that stand out as to why Ram is replacing the Chevrolet Silverado as the second-place truck for 2019.

2019 Ram 1500 is Relatively Affordable Compared to Other Brands

Ram made a brilliant marketing decision this year as a way to produce more trucks and create a more affordable version. As well as producing an all-new, redesigned 2019 Ram 1500, Ram continued producing what it called the 2019 Ram 1500 Classic version. The classic model carries the same body style as the 2018, but is a newly produced vehicle. By producing both models at the same time, Ram was able to offer a more affordable but new truck alongside a more expensive new version. Both models sold incredibly well in the market that appears to be truck crazy. Ram’s sales are up over 20 percent from a year ago.

2019 Chevrolet Silverado Hampered by Change Over

If you counted the sales for both the 2019 Chevrolet Silverado and its cousin, the 2019 GMC Sierra, GM’s trucks would actually still be in second place for sales. The 2019 GMC Sierra, with its new MultiPro tailgate had very strong sales, so far, in 2019. However, overall, the Chevrolet Silverado was hampered by the very thing that Fiat Chrysler and Ram avoided. Chevrolet actually shut down its Silverado and Sierra production as they changed over the plants to retool for the new models. Chevrolet was not able to produce as many vehicles as Ford and Ram, which were both up and running the entire time.

While it is too early to know if there will be UAW strikes at the other automakers, so far, the UAW strike at General Motors has shut down production for 18 days. No matter how many vehicles that Chevrolet may have stockpiled in preparation for the strike, it is unlikely that they can make up all of the missed production. Trucks are huge profit centers for all of the automakers, so once the walkout is over, Chevrolet will focus on truck production. Ram and Ford are surely cranking out as many trucks as possible right now, as they prepare for the intense UAW negotiations. If Ram and Ford do suffer walkouts, it is unlikely that their strikes would drag on as long as the current one hitting General Motors.

For those reasons, I believe that Ram will upset the Chevrolet Silverado for second place in truck sales for 2019. Remember, if you add in the GMC Sierra, GM still wins. But all of the automakers are seeing great truck sales, at least for now.