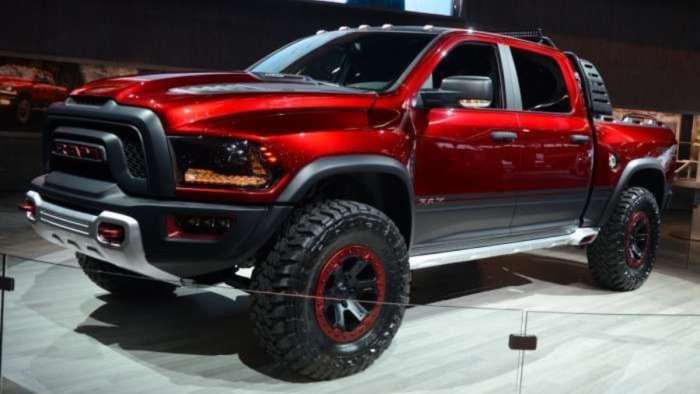 Fans may be able to get their hands on the highly anticipated RAM TRX in about three months.
Advertisement

Ram is making some pickup truck news of its own. The automaker is promising, on Twitter, that the Ram TRX will be coming in late summer. The tweet does not show the truck, nor does it say if it will be a 2020 or 2021 model. It shows a huge plume of dust and promises that “It’s not a mirage”.

The Hellcat-powered truck has been highly anticipated ever since the concept was displayed at the New York Auto Show in 2016. As Torque News managing editor Patrick Rall reported in March, “as part of the Company’s recently unveiled five-year plan, the Ram Rebel TRX concept has been approved for production”. Ram has said little else about the Hellcat-powered super-truck, except for showing an artist’s rendering of the high-performance truck on a Fiat Chrysler Drive for Design poster.

Ram lovers have been salivating over the idea of a 700+ horsepower Ram truck that could rival the Ford F-150 Raptor and build on the off-roading skill of the Ram Rebel. It was expected that the beast would be unveiled at the New York Auto Show, where the concept was first displayed in 2016. However, the COVID-19 crisis hit and forced all of the automakers to wait on their new product unveilings. The Ram TRX could have made a big impression at the new summertime Detroit Auto Show but that too was canceled because of COVID-19. Ford unveiled its all-important redesigned 2021 F-150 online last week and Ram took to Twitter to reaffirm plans for its super-truck.

Editor Rall reported in March that the Ram TRX was scheduled to start production in September. He speculated at the time that would mean the truck would be a 2021 model. Now, the tweet says the truck will be available in late summer. After losing two months of production, Ram is cranking out trucks as fast as it can, and recently announced that it was canceling its planned summer shutdown or changeover, when it typically makes small tool-and-die changes to signal a new model year. That means that the Ram TRX could debut as either 2020 or 2021 model. Ram is still promising a new “Built to Serve” edition for late summer that is billed as a 2020 vehicle.

Unfortunately, the COVID-19 crisis has forced the automakers to adapt as quickly as possible. The automakers are trying to build their most profitable vehicles as fast as possible and the new 700+ horsepower super-truck is so important, Ram will do everything it can to get it on the market quickly.