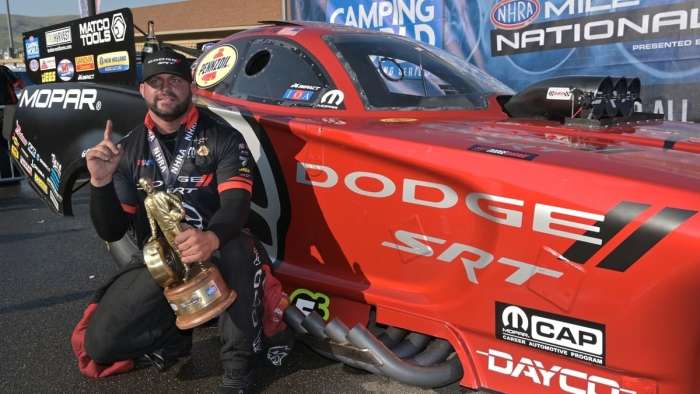 After a decade of trying, defending champion Matt Hagan won the Dodge//SRT Mile-High NHRA Nationals. It is Hagan's first win of the season but more importantly his sponsor's main race.
Advertisement

After a decade of trying, you could say that Matt Hagan and his Dodge Charger SRT Hellcat Funny Car finally conquered the mountain. Hagan drove an impressive 305.70 mph to win in 4.105 sec. at the Dodge//SRT Mile-High NHRA Nationals Presented by Pennzoil. Dodge//SRT and Mopar brands have sponsored the Mile-High NHRA Nationals at Bandimere Speedway, near Denver, Colorado, for 32 years, the longest consecutive sponsorship in all of motorsports.

“Man, I tell you, this mountain has chewed me up and spit me out several years in a row and I’m just so glad to pull that win down for Dodge and SRT, and to do it behind the wheel of the Dodge//SRT Hellcat Funny Car in front of so many passionate Dodge and Mopar fans is just something you definitely put extra pressure on yourself to do so when it happens it’s just that much more satisfying” said Hagan.

Hagan’s First Win of the Season

This is Hagan’s first win of the 2021 National Hot Rod Association season. His last win was at the 2020 Dodge NHRA Finals Presented by Pennzoil at The Strip at Las Vegas Motor Speedway, where he secured his third Funny Car NHRA world championship. This is Hagan’s 37th Funny Car career win. He drives his Dodge Charger SRT Hellcat Redeye for Don Schumacher Racing.

“Congratulations to Matt Hagan for his first event title win at the Dodge//SRT Mile High Nationals presented by Pennzoil,” said Tim Kuniskis, Dodge Brand Chief Executive Officer - Stellantis. “We’re proud of the defending Funny Car world champion and his Don Schumacher Racing team for bringing home the Wally trophy at an event that has meant so much to us for more than three decades.”

“We finally got it done and I finally get to put this trophy up on the shelf,” added Hagan. “I’ve got to call out my guys and give them so much love. To watch them up here in the altitude wrenching and sweating. Those guys love doing what they do and they bust their ass for me. My heart was beating out of my chest up there during the finals and it felt like I was running for a championship. I had to remind myself to calm down, take a deep breath and just do what I do. It’s so cool when you do a burnout and see all of these fans in the stands; it genuinely gives me chill bumps. It feels amazing being back in the winner’s circle like we’re used to.”

Hagan beat Alexis DeJoria in the Funny Car final. The team will now focus on the next two events in consecutive weeks at Sonoma and Pomona dragstrips in California.