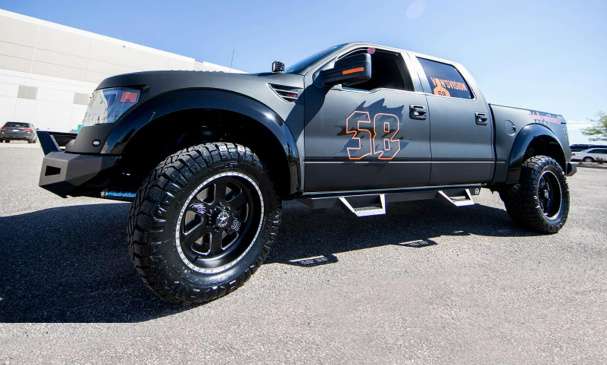 Truck lovers have until Friday, November 11th to bid on a one-of-a-kind tricked out 2013 Ford Raptor SVT. Superbowl MVP Von Miller commissioned the truck and it was featured on the Velocity Channel's "The Lifted Life".
Advertisement

Truck fans have the chance to bid on a one-of-a-kind supercharged 2013 Ford Raptor SVT. Von Miller, the MVP of the Super Bowl commissioned the truck and it was featured on the television show called “The Lifted Life” on the Velocity Channel.

Miller worked with Five R Truck, out of Golden, Colorado, on the redesign that was featured on the October 8th edition of The Lifted Life. The truck features a Roush Performance 590- horsepower supercharger, a Magnaflow exhaust and R1 Concepts custom brake rotors. It also features Miller’s number 58, and his autograph on the hood, rims and dashboard. The paint boldly proclaims the truck as the MVP Edition.

As of this afternoon, there has been one bid. Bidding started at $50,000 on Ebay. Bidding closes on Friday morning, November 11, 2016. In addition, the top bidder will also receive a meet and greet for two, including airfare and travel, that will take place at Miller’s 2017 Celebrity Go-Kart Grand Prix in Denver. VIP access for the event will also be included.

The money raised in the auction will benefit Miller’s charity called Von’s Vision. The charity helps provide needy children in Denver with glasses. Miller, an outside linebacker with the Denver Broncos is known for his glasses and he has said that he feels it is important that he help other children with vision problems.

The Denver Broncos released information today about Miller’s annual fundraiser last night. According to the Bronco’s Miller announced that Von’s Vision will be available to help Denver public school students next year. Miller is quoted as saying, “Any child that has any problem with their eye sight, they can just go to their school nurse and receive glasses. It's pretty incredible.”

Miller was selected as MVP of Superbowl 50 after the Denver Broncos defeated the Carolina Panthers.

The Ebay auction of the 2013 Ford Raptor SVT continues until Friday, November 11, 2016. More information is available on VonMiller.org.