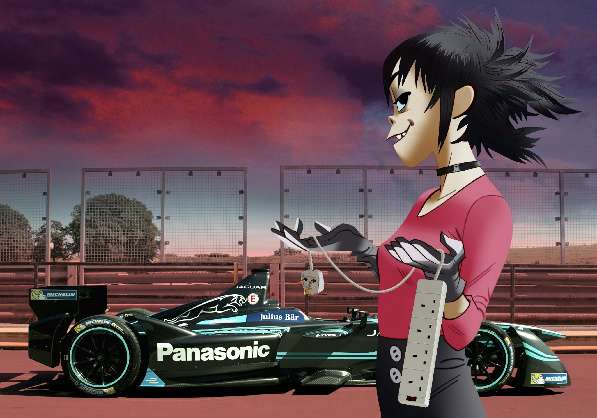 All of the auto makers are suffering because of a shortage of engineers. Jaguar is enlisting the help of a popular Japanese cartoon character, named Noodle, to help promote their E Formula race team. Jaguar is also hoping Noodle’s popularity in her virtual band “Gorillaz” will draw young people to the car business.
Advertisement

Noodle’s virtual band Gorillaz has sold 100 million records since 2000 but can they interest young people in cars and engineering? Many millenials are indifferent to vehicles, more concerned about having a phone than a license to drive.

Jaguar Land Rover is taking the unusual approach of trying to grab young people through the musical world. Fiona Pargeter, Communications Director of Jaguar Land Rover says in a statement, “By 2022 we’re facing a shortfall of 300,000 skilled engineers in the UK alone. It is our responsibility to change this future by inspiring young people.”

Jaguar recently confirmed its return to racing in Formula E competitions. The first race is this month in Hong Kong. Jaguar will use its E-racer to highlight the importance of electric vehicles and the tremendous changes occurring in automotive technology. Jaguar Land Rover is promising that it will be building electric vehicles in the near future. Many expect the first attempt to be a small electric Land Rover SUV. Jaguar says it is important for young people to be involved in some of the biggest changes that the car industry has ever seen.

In her new role as an ambassador for the Jaguar Racing team, Noodle is quoted as saying, “The young minds of today are the engineers of tomorrow. We are in the driving seat and our imaginations are the fuel. It’s time to lead the charge and build a better world!”

All of the American automakers have made significant investments in recruiting students for STEM programs. Trying to interest young people in Science, Technology, Engineering and Mathematics programs early on is important so they will eventually pursue careers in engineering or technology. It is interesting that Jaguar is using a female cartoon to try to interest male and female students. Young women are notoriously under-represented in the STEM fields.

Can a female, cartoon, guitarist solve Jaguar’s engineering shortage? If it is even mildly successful, you can expect to see other automakers follow suit.