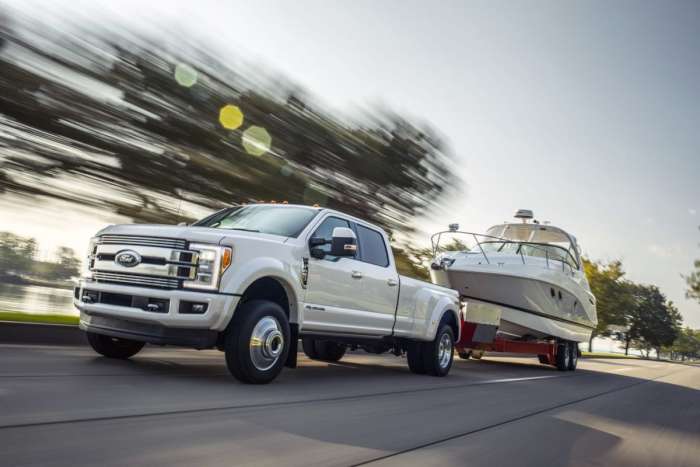 How Ford Plans To Cut $11 Billion and Become More Competitive

Ford is admitting that its second quarter profit fell by almost half, even though its popular F-150 is selling at a record pace. The automaker is planning to streamline operations worldwide and cut billions while also investing in self-driving vehicle development.
Advertisement

Ford Motor is admitting that it had a tough second quarter with its profit falling by nearly half. Ford’s second quarter profit was $1.1 billion. Executives say that trouble overseas and the fire at a Chinese-owned supplier that shut down F-150 production and forced the company to scramble for other alternatives cut into profits. Ford also took a huge hit on a Takata airbag settlement.

Ford warned today that CEO Jim Hackett’s global restructuring plan could cost $11 billion over the next three to five years. However, Ford says the global streamlining will improve the company’s competitiveness and improve returns eventually.

Despite some grim news Ford is upbeat about its business in North America, especially when it comes to the F-Series. “The North America business remains strong, with F-Series sales topping 236,000 units in the second quarter and on a record-setting pace through the first six months of the year.”

Ford released some information about its planned streamlining, when it announced the formation of Ford Autonomous Vehicles LLC. Ford is aligning all of its autonomous vehicle development and electric vehicle into the same division. That will eliminate redundancies through-out the corporation.

In addition, Ford is restructuring its Global Operations to include Information Technology. This will put global ordering, technology and production processes under one umbrella, led by Executive Vice President Joe Hinrichs.
According to Ford, “This realignment will help the company accelerate the integration and application of technology across its industrial system to further streamline manufacturing, speed vehicle delivery times, reduce inventories and improve capital efficiency.”

“The evolution of computing power and IT have helped bring great products to customers – from cars to tablets,” Hackett said. “We can now harness this technology to unlock a new world of vehicle personalization, supply chain choreography and inventory leanness that rivals any industrial model in the world – and Joe’s challenge is to help us redesign this system to do just that – while better serving customers and dealers and improving our overall fitness.”

One of the biggest cost-cutting moves that Ford is making is to cut the number of vehicle platforms it will use. Ford is moving to flexible vehicle architectures and more common parts across models, cutting new product development time – from sketch to dealer showroom – by 20 percent. Ford says this will help it achieve its commitment to deliver nearly $7 billion of engineering efficiencies.

Ford describes its new production plan this way. “Ford’s five flexible vehicle architectures – body-on-frame, front-wheel-drive unibody, rear-wheel-drive unibody, commercial van unibody and BEV – are paired with module “families” that address the power pack, electrical pack and vehicle configurations. Seventy percent of each vehicle’s engineering will be driven from this new architecture approach, with 30 percent of content – including grilles, hoods, doors and more – customized for each vehicle.”

All of the organizational plans take effect next week. You can expect that the drastic cost cutting will start soon after. Unfortunately, streamlining and eliminating duplication often means eliminating jobs in one area while refocusing efforts in other directions. I’m sure Ford is hiring autonomous vehicle specialists as it winds down some of the sedan-heavy operations.

By 2020, Ford is intending to offer four new trucks and SUVs. It is promising to replace three-quarters of its lineup. Ford has been criticized lately for not keeping up with its rivals in creating new and fresher products. CEO Hackett says that will change.

“We’re looking at every part of our business, making it more fit and ensuring that every action we take is driven by what will serve our customers in a way that supports our fitness and performance goals,” Hackett said.

You can compare Ford's vehicles with its rivals here.

Tim Vorick wrote on July 27, 2018 - 5:07pm Permalink
When Mullaly left you knew Ford would go back to it's old ways. Bill Ford & the Coach both need to go ! Wall street is not stupid and that is why the stock price is where it is.