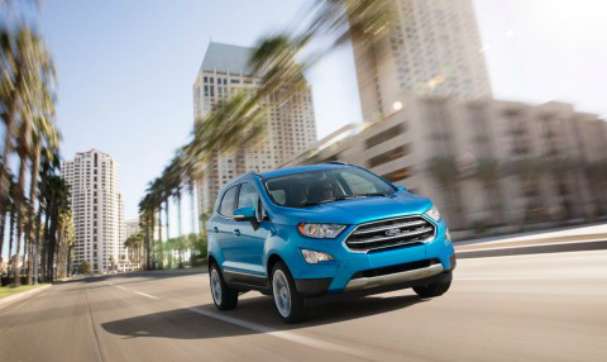 Ford unveiled the 2018 EcoSport on Snapchat, a strong indication of their target audience. The small SUV is loaded with premium audio and other amenities, is perfect for the young buyer who demands the latest in technology delivered in a small package.
Advertisement

Ryan Seacrest and DJ Khaled unveiled the 2018 Ford EcoSport SUV to a cheering crowd on Hollywood Boulevard with the motto, Go Small, Live Big. The unveiling was on the eve of the Los Angeles auto show.

All of the promotional material appears aimed at the younger market. A video on the news release compares the new compact SUV to your favorite backpack, “Enough room for the things you love but still manageable”.

The head of Ford’s U.S. marketing, Chantel Lenard says “More people are choosing to spend their time and money sharing experiences with friends and family instead of buying more stuff. EcoSport fits perfectly into this growing lifestyle. It’s our smallest SUV, packed with features and personality.”
Ford has been selling the EcoSport in other markets for years. It will arrive in American showrooms in early 2018.

Ford is the latest to join the compact SUV market. Buick started selling the luxury “baby Enclave” called the Encore in 2013. Chevrolet has the tiny Trax and Honda has the HR-V.

Mary Barra told me, long before she became CEO that GM was convinced that the U.S. was ready for small-premium SUVs. The Encore was filled with luxury, from the leather seats to the latest in amenities. They had a dual target audience, young people, who liked and could afford nice vehicles, but didn’t need a family hauler. They were also aiming at older drivers, people who wanted luxury but were looking to downsize. GM’s gamble paid off. The Encore has found its market and now Ford is hoping to find it as well.

The little EcoSport is built on the same platform as the Fiesta, so it is a small vehicle. It will have a swing-style tailgate. It will come in four different trim levels.

The 2018 Ford EcoSport will feature the latest in gadgetry, including electrical outlets for staying charged up and ready to take on the world. According to Ford, EcoSport will have “two fast-charging USB ports to ensure owners’ devices are always juiced. Plus, there’s a 12-volt power outlet. An available 110-volt outlet positioned behind the center console and another 12-volt outlet allow rear-seat passengers to stay plugged in”.

The 2018 Ford EcoSport will have an 8” touchscreen, Sync 3 and offer premium audio. The Titanium level package will include a B&O PLAY audio system, features 10 speakers, including B&O PLAY-branded tweeters and woofers in the front doors and a subwoofer in back.

Many have wondered why Ford has waited so long to bring the EcoSport to the U.S., especially because it has existed for at least a decade, elsewhere. Perhaps they waited to see how well the Encore would do.
Pricing and mileage ratings were not released. It is expected that the 2018 EcoSport will be Ford’s only tiny SUV for North America.