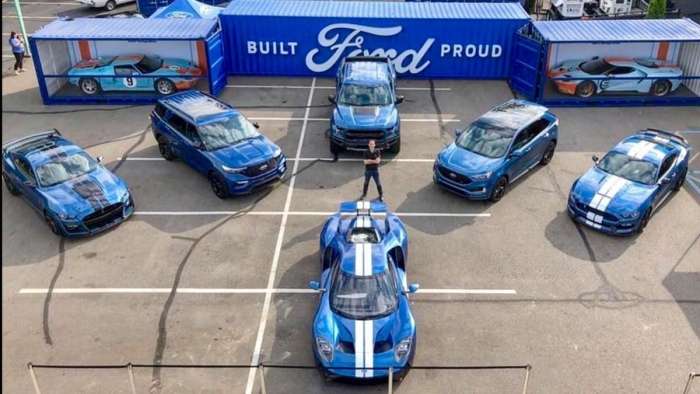 Ford has captured rare photos of all of its premier performance models out together in public including the 2020 Mustang Shelby GT500.
Advertisement

It appears Ford Motor took advantage of a huge automotive weekend in the ‘Motor City’ to highlight its impressive line of performance models for 2020. Led by the Ford GT, both the 2020 Ford Mustang Shelby GT500 and the Mustang Shelby GT350 are featured.

The third weekend of August is the annual celebration of the Woodward Dream Cruise in Detroit’s northern suburbs. Ford is a huge sponsor of the event and uses it to honor its classics, like the Mustang, which created the pony car market. Ford also uses the popular weekend to highlight the vehicles in its stable that are sure to be future classics, like the 2020 Ford Mustang Shelby GT500 and the 2020 Ford Mustang Shelby GT350. The 2020 Explorer ST and 2020 Edge ST models are such high-horsepower versions of the vehicles that Ford is creating driving schools and off-road programs to showcase them. 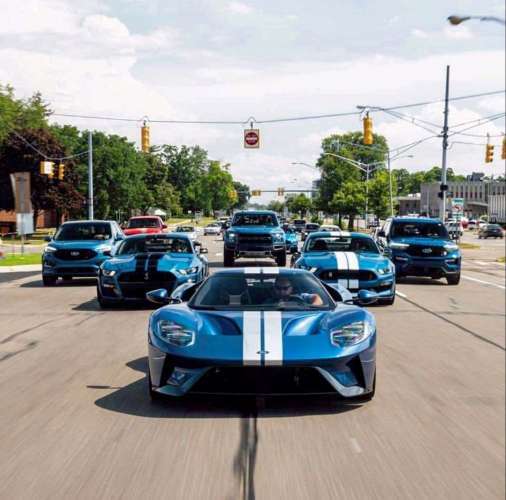 At one point, Ford captured all of the primary performance models traveling down the storied Woodward Avenue in a V-formation. It makes an impressive photo seeing the blazing blue Ford models perfectly aligned. Ford has not indicated what the photos and video will be used for.

The Ford GT is definitely the company’s halo vehicle. Incredibly rare and hard to buy, the GT is the epitome of a supercar. The current Ford GT is rated to get about 650 horsepower and 550lb-ft of torque from its twin-turbocharged 3.5L EcoBoost V6. It recently debuted a track-only version with 700+ horsepower.

Ford is promising that the 2020 Mustang Shelby GT500 will rocket from 0-to-100 and back down to 0 in just 10.6 seconds. Ford claims that its 760-horsepower 5.2-liter V8 engine is the most power and torque-dense supercharged V8 in the world. Ford credits the supercharged 760-horsepower engine and huge front brakes for the feat. At this point, Ford isn’t releasing the GT500’s 0-60 time, but it should be competitive with other performance cars.

The Mustang Shelby GT350 uses a 5.2-liter flat-plane V8 that delivers 526 horsepower and 429 lb-ft of torque with help from a Tremec 6-speed manual gearbox.

The All-new 2020 Ford Explorer ST is the highest performance SUV that the Ford Motor Company has ever offered. The new 3.0-liter EcoBoost V6 kicks out 400 horsepower and 410 lb.-ft. of torque. It is projected to have a top speed of 143 MPH.

The Ford Edge ST was the first of Ford’s new performance SUVs. Equipped with a twin-turbo V-6 2.7L EcoBoost engine, it delivers 335 horsepower and 380 lb.-ft. of torque. When the Edge ST debuted, Ford performance promised that there would eventually be Expedition and Escape ST models as well.

The Ford F-150 Raptor runs with a turbocharged EcoBoost 3.5-liter V6. The EcoBoost powerplant puts out 450 horsepower and cranks out about 510 lb.-ft. of torque. While the Raptor specializes in off-roading, it is built to withstand just about anything.

See you in our next story discussing how Ford makes buying the 2020 Explorer and Edge more appealing through a special experience.