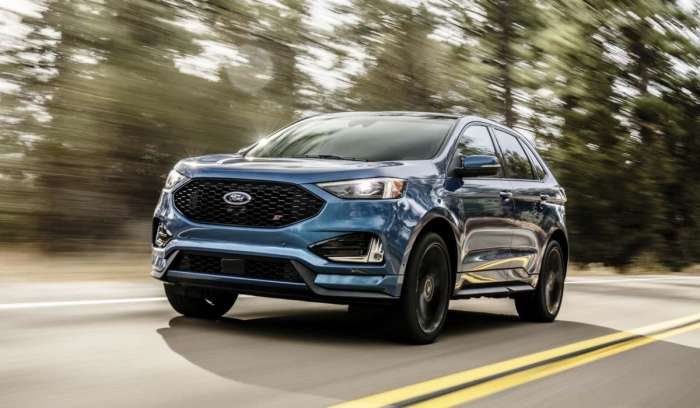 Ford is rolling out three mini documentaries announcing the arrival of the 2019 Ford Edge ST. The crossover is produced with the expertise of the Ford Performance division and promises to deliver fun as well as power.
Advertisement

Ford is betting heavily on the 2019 Ford Edge, especially the ST model which is being produced in conjunction with the Ford Performance division. The new 2019 Ford Edge ST may signal that Ford will produce other performance models of SUVs like its popular Ford Explorer, Ford Escape and its hot selling Ford Expedition.

Ford is debuting three short mini documentaries about the new Edge and what makes it worthy of an ST designation. Ford says the ST distinction dates back 20 years with models including the European Mondeo, the Focus ST and the Fiesta ST.

The first film in the series features Hau Thai-Tang, Ford’s Executive Vice President, who oversees product development and purchasing. Thai-Tang says that the ST is more than a badge, it is Ford’s first performance SUV. The ST gives the driver the joy of driving and in effect admits the driver into the Ford Performance fraternity.
The 2019 Ford Edge ST was unveiled at the 2018 North American International Auto Show. Equipped with a twin-turbo V-6 2.7L EcoBoost engine, it promises to deliver 335 horsepower and 380 lb.-ft. of torque.

The 2019 Ford Edge ST features a new all-wheel-drive disconnect, a first for Ford that will improve traction and reduce gas usage.

According to Ford, “All-wheel-drive disconnect switches automatically between two-wheel and all-wheel drive in a fraction of a second, using a form of artificial intelligence to sift through information like wheel slip, road conditions, vehicle speed, windshield wiper usage and outside temperature.”

“The concept is pretty simple, it was the execution that was the challenge,” said Scott Beiring, Ford driveline applications supervisor. “Shifting between two- and all-wheel drive needs to be fast and seamless enough that the customer doesn’t know it is happening.”

According to the mini-documentary, “The Ford Edge ST allows you to join the Performance family, without sacrificing anything you need for your family.”

The new ST equipment package is designed to allow the driver to access the vehicle’s power better, earlier and faster.

The ST model has unique dual exhaust pipes and special contoured ST sport seating. The ST even has steering wheel-mounted paddle shifters for the racer in you.

Ford is going all out to promote this new performance SUV. Depending on how successful it is, one can definitely expect to see performance versions of Ford’s other popular SUVs sooner, rather than later. The 2019 Ford Edge ST models are due on dealer lots soon.