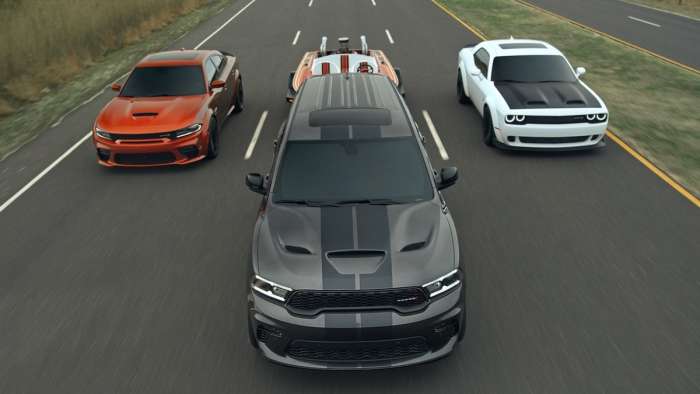 The racing movie parody “Talladega Nights: The Legend of Ricky Bobby” became an instant classic with race fans. Released 15 years ago, the movie stars Will Ferrell as supposed NASCAR driver Ricky Bobby and John C. Reilly as his lifelong friend and race car driver Cal Naughton Jr. Dodge is out with a new ad paying tribute to Talladega Nights. The ad imagines how Ricky Bobby’s dad would have taught the duo life lessons.

The original movie highlighted the good friends affectionately called “Shake and Bake” by their fans. It made lines like “If you’re not first, you’re last” popular at the track. Ricky Bobby was taught to “Win at all costs”. His sidekick Cal always came in second.

In the new ad, Reese imparts words of wisdom like “Life takes 50% bravery and 60% stupidity;” “Take it from your daddy. Just because you grow up, doesn’t mean you need to give up” and “The most powerful force in the universe is love. Ha, ha, ha, no, it’s not! It’s hot, nasty, badass speed!”

“Given the incredible response to the ‘Family Motto’ campaign from the Dodge brand last year, we wanted to follow it up with the all-new ‘Life Lessons’ campaign,” said Olivier Francois, Global Chief Marketing Officer, Stellantis. “As with our first spot, we wanted ‘Life Lessons’ to stay authentic to both the Dodge brand and to the original film. We were able to accomplish this endeavor with Sony Pictures as it marks the 15th anniversary of the original film, in addition to an amazing roster of creative allies, including Sony Music and AC/DC, Applebee’s, Wonder Bread, Old Spice and Mountain Dew.”

“One of the ‘Life Lessons’ for those of us at Dodge is always striving to give enthusiasts what they ask for, so in addition to giving them more from ‘Talladega Nights: The Ballad of Ricky Bobby,’ last year we launched three 700-plus-horsepower muscle cars with the new Challenger SRT Super Stock, Durango SRT Hellcat and Charger SRT Hellcat Redeye,” said Tim Kuniskis, Dodge Brand Chief Executive Officer, Stellantis. “Together, these vehicles comprise Dodge, the automotive industry’s most powerful brand. Lesson learned.”

Gayle Nowakowski wrote on December 31, 2021 - 12:42pm Permalink
I think that movies like that are funny and entertaining but when you get children who think they are invincible and steal the keys one night to imitate their favorite Nascar driver then that becomes a very deadly problem