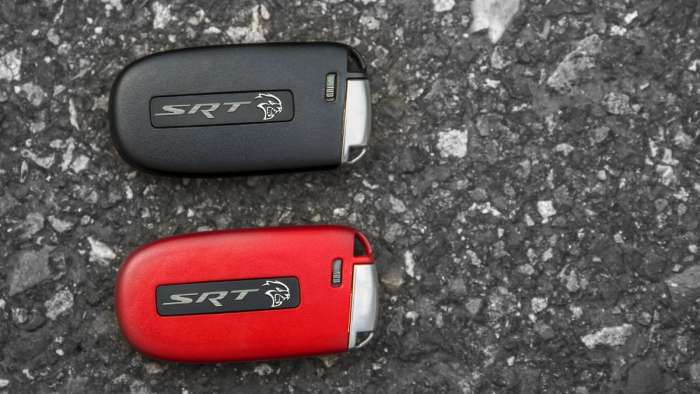 An automotive porter for a train company is under federal arrest for an elaborate scheme. The porter stole key fobs and sold them online.
Advertisement

A Detroit-area man is under federal arrest for an elaborate scheme to steal and sell expensive key fobs. The man is accused of stealing key fobs out of brand new cars like the Dodge Challenger SRT Hellcat. He and a childhood friend then sold the key fobs online. The two are believed responsible for the theft of nearly 2000 key fobs that sold for over $60,000 online.

According to a federal criminal affidavit, filed by postal inspector Mykeita Brown, the investigation into the thefts went on for nearly two years. The criminal complaint accuses 41-year-old Jason Edward Gibbs of stealing from interstate freight shipments.

According to the affidavit, Gibbs worked as a porter at a CSX train facility in New Boston, Michigan, near the Detroit Metro Airport. The affidavit explains “New cars assembled in Michigan and nearby states are transported by tractor-trailer car carriers to the New Boston facility. Each car is unlocked, and inside of each car are two key fobs, typically zip tied together.” It goes on to explain that porters use the key fobs to drive the cars onto autoracks which are specialized freight cars used to transport vehicles. The two key fobs are supposed to be left inside the unlocked vehicles. Once the autorack is full, it is sealed and transported out of Michigan by CSX Railroad.

In February of 2018, CSX started receiving complaints from Ford, Chrysler and GM about missing key fobs. New vehicles, like Ford F-150s and Dodge Challengers were arriving at dealerships with only one key fob. The affidavit says the vehicles included sedans, minivans, SUVs and pickup trucks. An internal audit discovered all of the key fobs disappeared at the New Boston facility.

At about the same time, CSX found someone online selling the same sorts of key fobs. During their investigation, CSX and postal inspectors discovered that the online seller’s account belonged to a childhood friend and schoolmate of Gibbs.

According to the affidavit, “EBay and PayPal records establish that between December 15, 2017, and May 16, 2018, a total of 1,914 key fobs were sold through the account at eBay or following phone conversations between Gibbs and the California buyer.”

Payments for the key fobs totaled $60,570 and they were all sold to the same California buyer who isn’t named in the affidavit. Feds say that the California buyer sold the key fobs to people for between $69 and $160. It is believed that the end users would attempt to reprogram the fobs so they could be used on other cars. The feds do not say if the buyers were just trying to replace lost key fobs or if they were trying to use them to steal vehicles.

Anyone who has ever lost a key fob would tell you that they are expensive to replace. The auto companies reported to CSX that the average was about $250, but some of the specialty fobs for vehicles like the 2018 Dodge Challenger SRT Hellcat can run much more. The key fobs for the Dodge Challenger Hellcat are highly specialized. One of the fobs can start the car but the other red key fob can unlock the vehicle’s ability to kick out over 700-horsepower.