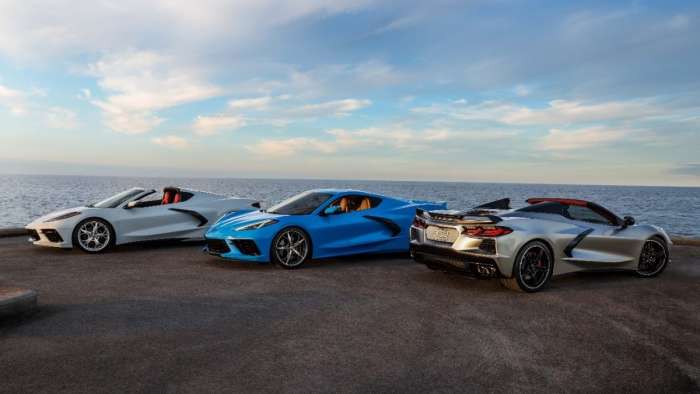 Chevrolet has workers returning to its Bowling Green, Kentucky, Corvette plant starting tomorrow. All workers are expected back by mid-week. Devastating tornadoes damaged the plant on December 11. Fortunately, no Corvette workers lost their lives.
Advertisement

After being down for a week because of tornado damage, the Bowling Green, Kentucky, Corvette plant will call some of its workers back tomorrow. Other workers will be called back throughout the week, with all employees expected to be back to the plant by mid-week. The Bowling Green facility is the only plant in the U.S. that builds the 2022 C8 Chevrolet Corvette Stingray and convertible. Bowling Green Assembly employs 1200 hourly and 180 salaried workers.

Tornadoes tore through Kentucky and Illinois in the early morning hours of December 11. Because it was early Saturday morning, luckily there were very few employees inside the plant at the time. All of the workers were safe, although, the plant had damage to its roof and an employee entrance. GM was able to complete the repairs quickly by sending in equipment and construction materials from plants like Factory ZERO in Detroit. Skilled trades employees worked throughout the week to make the repairs and get the plant back on line.

Some New Corvettes Damaged in Tornado

According to the publication GM Authority, more than 100 2022 Corvettes were damaged during the tornado. “Roughly 115 vehicles that were stored in the plant were damaged beyond repair during the tornadoes and will have to be scrapped, with affected dealers and customers being asked to resubmit their orders if they still want to receive their vehicles. A number of vehicles that were being stored outside in a parking lot were also damaged in the tornado, but GM had yet to take full stock of these vehicles as of Friday evening. These vehicles are currently being held by the plant and will not be shipped to dealers until a full assessment is completed.”

This is just the latest setback to the C8 Corvette production. Several unexpected delays forced Chevrolet to push the mid-engine Corvette Z06 to a 2023 version. The same plant will start building the 2023 Chevrolet Corvette Z06 late next year. The Corvette plant has had a difficult 20 months, first because of COVID, then the semiconductor chip shortages and then parts shortages, not linked to the semiconductor chips. A February storm in the southern states forced many auto suppliers to cancel production of petroleum-based parts. Many 2021 Chevrolet Corvette Stingray orders have been delayed into the 2022 model year production. Now it appears more than 100 of the production vehicles have been damaged beyond repair. The plant switched to building 2022 model year Corvettes in September.

What is particularly sad about the delays is that the C8 Corvette has been a hot seller for Chevrolet. 2022 is the third model year for the mid-engine design and Chevrolet hasn’t been able to keep up with significant demand for the performance car. Chevrolet worked for years to get the mid-engine design perfected. While Chevrolet still builds a relatively small number of the halo cars per year, compared to the huge numbers of trucks and SUVs, it is sad to see them lose or delay any of the planned production.

Sam Paschal wrote on December 27, 2021 - 2:33am Permalink
Production of my new 2022 Corvette was delayed by the recent unfortunate weather related events in Kentucky. Like many, I am anxiously awaiting news of the regular production getting back to full speed. My order was recently updated to 3100 event code only to be returned to a 3000 event code without explanation further delaying production.
DP wrote on January 12, 2022 - 11:46pm Permalink
Same here. How long? Thanks, DP.